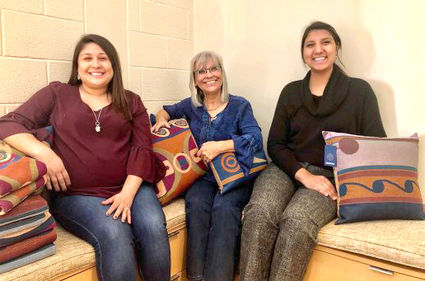 The founder of Mahota Textiles, Margaret Roach Wheeler (center), displays an assortment of new products from the "Heritage Collection" alongside Bethany McCord (left) and Taloa Underwood

SULPHUR, Okla.-Since its launch in October 2018, Mahota Textiles LLC has already made waves in the Native American art world. The First American Art Magazine named the founding of Mahota Textiles to its Top 10 Native Art Events of 2018.

"I think the story really begins with Mahota and the Chickasaws," Margaret Roach Wheeler explained, referring to a Chickasaw matriarch in her lineage-the namesake for both her co-op and the new business.

"In 1844, she came from Mississippi during Removal and was a widow," Wheeler explained. "She wound up coming to what is Burneyville today, in Indian Territory. She was an older woman when she came. That is, to me, where my story begins, with the Chickasaw named Mahota."

The threads of Wheeler's history are depicted in the Mahota Textiles company logo. With an aesthetic similar to early Native American stone carvings, or perhaps the age rings of a tree, the logo traces five generations of Chickasaw women: Mahota, Nancy Mahota, Juel, Rubey and Margaret.

Out of this lineage across three centuries of Native American history, Wheeler developed as a painter, sculptor, educator, Native historian, weaver and 2010 Chickasaw Hall of Fame inductee.

"We are makers of art, of story-the threads that connect the inspiration of our ancestors to all of us in a modern world," Wheeler said.

Wheeler's labor of passion is shared with a small team of hardworking women.

"It is all love. It is all things I love to do, people I love to be with," Wheeler said. "People have come in that are so talented to help me with this venture. It is not happenstance, but how things are supposed to go and fit together. It is wonderful."

At Wheeler's side are a student of weaving named Taloa Underwood and the business-savvy Bethany McCord. Using three new designs crafted by Wheeler, Mahota Textiles launched its first line of blankets, pillows and bags called "The Heritage Collection."

As part of Mahota Textiles' "Heritage Collection," the Chickasaw map design uses almost entirely straight lines and filled in circles. It is fashioned after a 1723 historical map, an illustration of how the Chickasaw people visualized relationships with other tribes at the time. The map was originally crafted onto deerskin and delineates an understanding of population, power, influence and diplomacy within a 700,000-square-mile area, including waterways and trade routes.

Represented in Southeastern design through what are now called sun circles, these symbols depicting the sun have been found on a range of objects including burial items and adornments to stone disks used as paint palettes. They often include concentric circles and spirals, and may contain a cross or inverted scalloped lines within a circle.

Wheeler said she sees Mahota Textiles as a way to give back to the tribe which has supported her on her journey.

"I am truly blessed with who I have come in contact with," Wheeler said, referring to her team at Mahota Textiles.

Upcoming product lines for Mahota Textiles will be themed after the summer and winter solstices. Plans to include guest artists are also in the works.

This blanket shows the sun circles motif from Mahota Textile's "Heritage Collection." Sun circles have been found on a range of objects including burial items, adornments and stone disks used as paint palettes. They often include concentric circles, spirals and may contain a cross or inverted scalloped lines within a circle.