The Legend of the Rabbit and the Deer 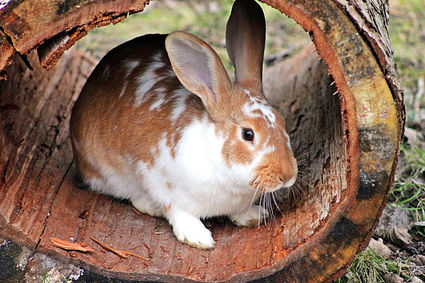 An old Cherokee legend tells the story of how what we want isn't always what is best for us.

A long time ago, all the animals lived together in peace. Since they all lived in peace, they didn't need any weapons to defend themselves so the animals didn't have antlers or horns or sharp fangs or sharp claws. They ate grass and leaves and nuts and berries.

One day the animals were talking about who could run the fastest and they agreed whoever could jump over logs and rocks would be the fastest. The deer and the rabbit both thought they were the fastest because they could leap so high. The other animals said they should have a race and the winner would be the king of the animals and would be given a beautiful crown.

The night before the race, the rabbit gnawed through the bushes and made a tunnel so he could just run straight and not have to jump over the bushes like the deer would have to do. The rabbit didn't know the owl saw him making the tunnel, and the next day when it was time for the race, the owl told the other animals that the rabbit was planning to cheat. The animals decided because the rabbit had planned to cheat, the deer was the winner and would be the king of the animals, and the deer would wear the crown.

The deer was given a beautiful crown of antlers, but because he was kind-hearted and felt sorry for the rabbit, he said once a year he would shed his crown and let the rabbit wear it for a while. When the rabbit tried to wear the antlers he discovered they were too big and too heavy and got tangled in the bushes. He realized he was better off just having his long, soft ears that he could lay flat against his back as he scurried through the bushes and into his safe hole.

Sometimes we are better off not getting the things we want.

We've all loved people who didn't love us back. We've wanted jobs we didn't get. Other people seemed to get the love, money, power, blessings and easy lives while we struggled just to survive. It doesn't seem fair.

Every day we are bombarded by commercials on TV that tell us we will be happy if we are thinner, stronger or use a certain shampoo or makeup. We're told if we take vitamins, if we buy their product, it will change our lives.

We have to learn to just be happy. Yes, it's great to be loved, to have a job we like, to have friends and to have a nice home, but our happiness shouldn't depend on things. There are things I'd like to have, but I probably won't get most of them. I can't sit around feeling sad or cheated or think that life isn't fair.

It's human nature to want more. And it's OK to want more-but don't let your happiness depend on it.

If we don't get the job we wanted, or the mate we wanted maybe it is because something better is in our future. Your happiest days, your biggest adventure, your greatest love, could all still be ahead of you. Everything will work out in the end . . . and if things haven't worked out yet, it's because it isn't the end.

Trust in the Lord with all your heart; do not depend on your own understanding. Seek his will in all you do, and he will show you which path to take. -Proverbs 3:5-6 (NLT)

Crying Wind is the author of Crying Wind, My Searching Heart,

When the Stars Danced,

Thunder in Our Hearts, Lightning in Our Veins, and Stars in the Desert.