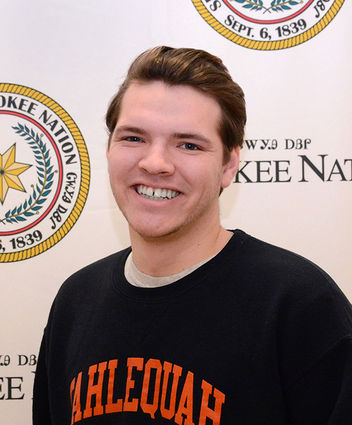 TAHLEQUAH, Okla.-Cherokee Nation citizen Brian Barlow is using his last term on the National Congress of American Indians Youth Commission to share his story and encourage other Native youth to get involved.

"I was so honored and humbled to have been elected to this position by my fellow Native youth and am so thankful for the support of my family, community and tribe," said Barlow, of Tahlequah. "There are countless Native youth out there making a difference in their communities every day. Our youth are amazing, intelligent, creative and powerful."

Barlow, 24, has been active in several Cherokee Nation programs, including the tribe's Tribal Youth Council and the 2017 Remember the Removal Bike Ride. Later that same year, he was awarded the Dreamstarter grant from Running Strong for American Indian Youth, which he will put to use by integrating the Cherokee language into the signage at the Walmart in Tahlequah.

"Today's Native Youth are members of the seventh generation, and they are making a difference every day," Barlow said. "The NCAI Youth commission works to gather and strengthen these voices. We must stand together, we must hold each other close, and we must never give up."

As current male co-president of the commission, Barlow will complete his four-year term in October.

"We commend Brian on the great work he has accomplished and for the example he has set for other Cherokee youth. He has certainly put his leadership skills and drive to work here in the Cherokee Nation," Secretary of State Chuck Hoskin Jr. said. "We always encourage our youth to stand up and exercise their voices, and the NCAI Youth Commission is one of many great ways to do that."

The NCAI Youth Commission was established in 1997 as a way for Native youth to be empowered and have a voice on issues that affect them. The commission also serves as an opportunity for networking and leadership development.

Registration is now open for American Indian or Alaskan Native youth ages 16-23 to learn about the NCAI Youth Commission through a three-day webinar, in preparation for the upcoming October election.

For more information about the NCAI Youth Commission, visit http://www.ncai.org/native-youth/ncai-youth-commission.