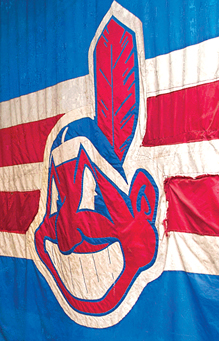 This Chief Wahoo battle flag is on Progressive Field in Chicago. Chief Wahoo is looking at retirement after 70 years of being the mascot for Cleveland Indians baseball.

CLEVELAND-Major League Baseball has announced that the league's Cleveland franchise will retire the team's Chief Wahoo mascot and logo in 2019.

The mascot will remain on uniform sleeves and caps in 2018, but will be removed from these items and its field presence starting in the 2019 season.

"Major League Baseball is committed to building a culture of diversity and inclusion throughout the game," said MLB Commissioner Rob Manfred...