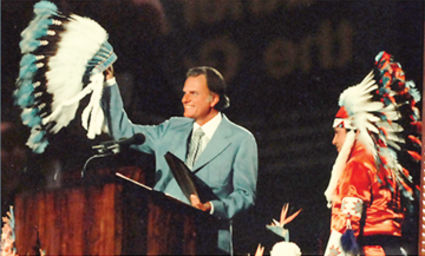 Billy Graham holds a headdress he received in a 1974 Arizona Crusade from Rev. Tom Claus, who also gave him the Native American name Warrior of the Great Spirit.

Kansas City, Mo.-On February 21, evangelist William Franklin (Billy) Graham died at 99 years old, in his Montreat, N.C. home. In 60 years of ministry, Graham preached to an estimated 215 million people in 185 countries through his crusades. He reached hundreds of millions of others through television, video, radio, and film.

Often referred to as America's pastor, Graham had a heart for Native Americans. From his earlier crusade Graham welcomed all tribes into his crusades, often featuring a Native American evening, and inviting Native American dignitaries such as Reynard Faber, great-grand...