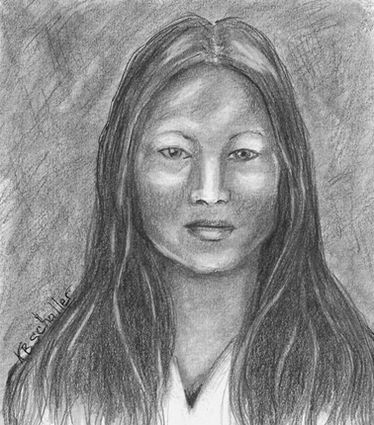 Born to Mi'kmaq parents Mary Ellen Pictou and Francis Thomas Levi in a small Indian village in Nova Scotia, Canada, Anna Mae Pictou was the third of four children. Her father disappeared before she was born, leaving Mary Ellen and her children to live in poverty. Even so, Anna Mae attended school on the Mi'kmaq Reserve and did well in her studies.

Mary Ellen married again (1949), this time to Mi'kmaq traditionalist Noel Sapier, a migrant farmer, as were many other Mi'kmaq. Although he was a hard-working man and a craftsman, the family lived without heat, water or electricity and subsisted on what they were able to harvest-largely, wild turnips and potatoes.

Sapier was unable to earn enough to improve the family's financial status, but he taught the children discipline, instructed them in the traditions of their people and provided stability in the home.

Noel Sapier died of cancer in 1956, and in the same year, Mary Ellen suddenly moved to another reserve to marry again, leaving Anna Mae and her siblings to eke out a living harvesting potatoes and berries.

Now attending school off the reserve, Anna Mae encountered blatant racism for the first time. Her grades fell, and she eventually dropped out. At age 17, in 1962, she and her friend, Jake Maloney, moved together to Boston, Massachusetts, where Anna Mae found factory work and met other First Nations Canadians, as well as American Indians.

Soon after giving birth to a daughter (Denise, 1964), Anna Mae and Jake Married, and the birth of a second daughter followed (Deborah, 1965). When the marriage failed, Anna Mae moved back to the Mi'kmaq Reserve.

Between 1968-1969 when Native people were demanding equal rights, treaty fulfillments and cultural recognition, Anna Mae moved to Bar Harbor, Maine, with her daughters, where she volunteered to teach self esteem and Native history to urban youth. There she also became involved in the American Indian Movement (AIM).

In 1970, Anna Mae participated in AIM's Thanksgiving Day march to protest the Mayflower II celebration in Boston. When the group seized and occupied the ship, it ignited Anna Mae's passion for Native rights.

Within this timeframe, she was instrumental in creating the Boston Indian Council (later renamed the North American Indian Center of Boston) to improve Indian life within the city. This was also when she met Chippewa artist/activist Nogeeshik Aquash.

Anna Mae participated in the Trail of Broken Treaties caravan/march on Washington, D.C. (November 1972), and after a week of the protesters occupying the Bureau of Indian Affairs building, the government promised a point-by-point review of their 20 civil rights demands.

In February 1973 Pictou joined a group of 200 Oglala Lakota, AIM followers, and other sympathizers who gathered at Wounded Knee near the Pine Ridge Indian Reservation-where on December 29, 1890, 500 U.S. soldiers killed 300 Minneconjou Ghost Dancers.

The group further protested broken treaties by the United States Government and demanded a reopening of negotiations.

During the siege, Anna Mae and Nogeeshik smuggled in food and medical supplies-and married in a traditional ceremony by a Lakota elder.

After the standoff, AIM leaders Russell Means and Dennis Banks were arrested and indicted, while Anna Mae was on her way to leadership within the movement. But events would soon turn tragic for Pictou-Aquash. On February 24, 1976, a rancher discovered her frozen body on the Pine Ridge Reservation.

While at first officials believed that she had died from exposure, a second autopsy revealed that she had been shot at the base of her skull. Not until 2003 were arrests made of those who believed her to be a government informant, and the two people were not convicted of the crime until 2004 and 2010.

Anna Mae Pictou-Aquash remains a powerful symbol of the era of Native rights activism and is best remembered as an Indigenous woman activist for justice.

KB Schaller(Cherokee/Seminole heritage) is a journalist, novelist, and illustrator. A version of this article appears in 100+ Native American Women Who Changed the World by KB Schaller, winner, 2014 International Book Award, Women's Issues Category. Her books are available through Amazon.com and other bookstores. She lives in South Florida. Email: soaring-eagles@msn.com