Navajo, other tribes call land-use bill a step in the right direction 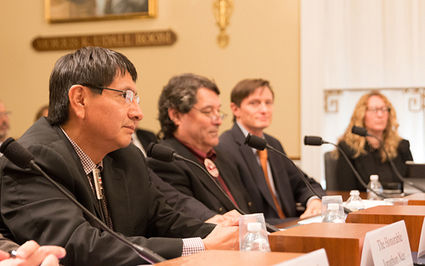 Navajo Nation Vice President Jonathan Nez, left, said that tribes have to deal with layers of federal bureaucracy for most projects, adding "years ... and a lot of resources" to their length and cost.

WASHINGTON-Tribal leaders backed a House bill on October 25, 2017, that would give tribes the ability to control more of their land, instead of having to get federal approval for virtually any use.

The American Indian Empowerment Act would let tribes shift federally controlled trust land to "restricted fee land," a move that could save millions of dollars that tribes now spend on "burdensome regulation," while restoring a level of tribal sovereignty.

While they called the bill a step in the right direction, however, witnesses said they are concerned about ambiguities in the thin, three-page...