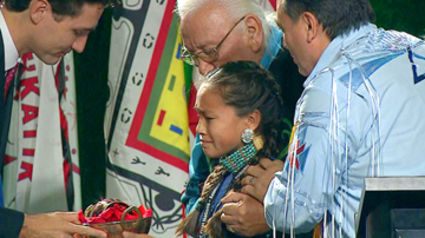 A Wikwemikong First Nation girl from Manitoulin Island in Northern Ontario has been nominated for the International Children's Peace Prize. Thirteen-year-old Autumn Peltier is the only Canadian being considered for the prestigious award.

The public eye is not new to this young teen, who has been speaking on her passion for the environment, especially Canada's water, for years.

Her advocacy began when she entered a community writing contest with an essay on water at eight years old and won an Odawa/Ojibwe language native speaking contest. She kept entering writing contests with essays on en...