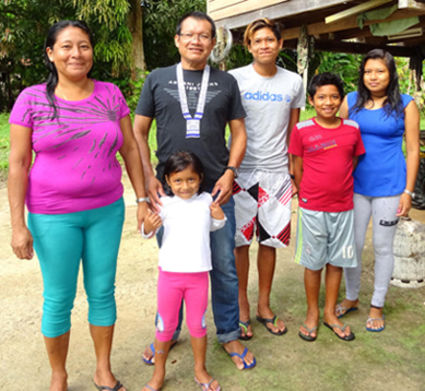 Ipomadi, the "Grandman"of the Wayana Tribe visited our Indian Life office in Winnipeg. He shared with us a photo of his family. One of his concerns and that of many of his community is the invading forces and influences of 21st Century civilization on his family, church, and community.

Recently, World Team's Marco Schuurman, and Ipomadi, the "Grandman" of the Wayana Tribe visited our Indian Life office in Winnipeg. Marco shared about the work in Suriname and French Guyana and translated for Ipomadi, who in addition to being his tribe's chief, serves as an elder in the Wayana church.

Indian Life: Did you come to know Jesus as a child growing up or later in life?

Ipomadi: I came to know Jesus in the children's club.

Indian Life: How did you become a follower of Jesus?

Ipomadi: We learned from the Bible about Jesus through the club in the church.

Indian Life: When was the...