Positive proof of love and appreciation 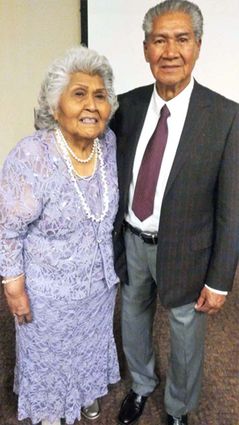 Bernita and Julian were overwhelmed by the outpouring of love and personal testimonies to the influence their lives had on so many. Julian said, "The warmth and love that permeated that room was more than words can say. It was like one family, and that's the result of being a part of the family of God."

ALBUQUERQUE, NM-The date was April 29, 2017; the venue was the Pueblo Indian Cultural Center in Albuquerque, NM. The event? The Retirement/Farewell Party for Rev. Dr. Julian and Rev. Bernita Cachora-Gunn.

As soon as we heard about the celebration, my husband and I knew we just had to be there. About 200 guests came from near and far-Arizona, California, Michigan, Minnesota, Oklahoma, and of course, New Mexico.

When Dave and I arrived at the venue, the air was filled with excitement as the room filled up with pastors, Southwest Native American District (SNAD) leaders, and many friends whose lives have been influenced by the Gunns. A slide show played on the screen, showing a young Julian and Bernita when they attended the Nazarene Indian Bible School in Albuquerque, pictures of their wedding and subsequent young family when their son and daughter were born.

Since 1991, the Gunns have been pastoring the Apache Avenue Church of the Nazarene in Albuquerque for the past 26 years.

Dr. Gunn spoke of God's call and his surrender to that call into the preaching ministry back in 1963.

"God giving my wife and me our first church to pastor among the Cheyenne and Arapaho tribes in El Reno, Oklahoma in August 1963," Dr. Gunn said. "Also finishing my minister course of study at the Nazarene Indian School in Albuquerque, and when I was ordained as an Elder in 1968. Those are important highlights for me."

The Gunns pastored among the Ponca tribes in Ponca City, Oklahoma between 1968 and 1971.

He was elected by the Native American Indian District to serve as District Superintendent from 1976-1991.

Dr. Gunn also served on the Board of other Christian organizations, in particular with C.H.I.E.F., Inc. until 2017, the last 15 years as Chairman. He served as Chairman of the Board for Sun Valley Indian School for 10 years as well as Chief Financial Officer for North American Native Christian Council, working with World Vision to promote a Leadership Conference for Native American Christian Leaders in 1987.

The Gunns were presented with a Pendleton robe and blanket from their church, Apache Avenue Church of the Nazarene.

The planning that went into this event began last year and Martina Garcia, a member of the Gunns church, did a wonderful job in pulling it all together from creating invitations to securing the venue and everything in between, and I would be remiss not to acknowledge her and thank her for her labor of love.

Bernita indicated how important it was for her to acknowledge everyone who came to celebrate with them. She greeted everyone, shook hands, and bestowed hugs as did Julian. Both were overwhelmed by the outpouring of love and personal testimonies to the influence their lives had on so many. Julian said, "The warmth and love that permeated that room was more than words can say. It was like one family, and that's the result of being a part of the family of God."

Highlights for the Gunns

Julian and Bernita will be married 54 years in August 2017. That is truly an accomplishment in today's society where it's easier to walk away from a commitment instead of working things out. They were blessed with a son, Damon, and a daughter, Yolanda. The Gunns recently lost their only son but the fact that he accepted Christ as his personal Savior while in the hospital and nearing death, gives them consolation along with the hope and promise that they will see Damon again in heaven!

"I am of the Quechan tribe, born and raised on the Fort Yuma reservation in California." God brought me to faith in Jesus Christ through Sunday school and hearing the young people testify about their salvation. A couple of highlights from young adulthood include traveling 800 miles to attend the Nazarene Bible School and meeting all the students from different tribes.

'The gospel continued to alter my life after my conversion through enlightenment on sanctification, seeking and finding that God was faithful in answering my prayer of commitment of my entire life to Him," Bernita stated.

"I always fought to keep my temper in check, my bad cussing was gone. I probably had an attitude problem, too. Some family issues still bothered me greatly. I sat through many preaching services saying, "That's me, Lord." But I finally surrendered and the fire fell on me and God received the sacrifice!

"God's love shows itself in how I serve other people. The Lord taps my shoulder, or impresses me, or it is in the Word. I love to listen and obey.

The greatest joy in my life was when I was ordained as an elder in the Church of the Nazarene, and was able to write "Rev. Bernita Cachora-Gunn!"

"I was born and raised on the Fort Mojave Indian Reservation, located along the Colorado River in the vicinity of Needles, California. My father's side was Acoma Pueblo and my mother's side is Mojave.

"I thank God for a Christian mother who prayed for me and took me to church where I learned about Jesus through Sunday school and church worship services and special services such as revivals and camp meetings. 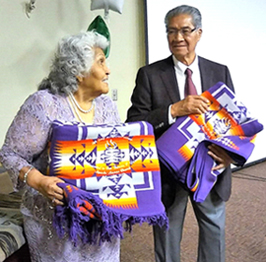 About 200 guests, including pastors, family and friends, came from across the country to join members of the congregation to celebrate the lives and ministries of Dr. Julian and Mrs. Bernita Gunn. The Gunns were presented with a Pendleton robe and blanket from their church, Apache Avenue Church of the Nazarene.

"With my church upbringing, I had a head knowledge of who Jesus was, but did not have a personal experience with Him. As a young child about eight or nine years old, I was convicted of my need for Jesus at a Western Zone camp meeting.

"As I entered my teen years, I began to seek after things of this world, and got caught up in living for the world. I thought the life of sin to be glamorous, exciting, and fun, but saw that the reality of it was the opposite. It only brought heartache, physical and emotional pain, and shame, which led to a dead-end street. But thank God, the Holy Spirit put a deep conviction upon me, and I realized Jesus could change me and give me real purpose to my life, so I confessed my need of Jesus and gave my heart and life to Him."

"Three months after my conversion experience, I felt and knew that there were still some things in my heart that should not be there. Things like anger, jealousy, and envy. I knew that my spiritual need was for a heart cleansing experience called "entire sanctification." I sought for this experience of sanctification and heart purity and God heard my cry and sanctified me holy and wholly as I surrendered my all to Him."