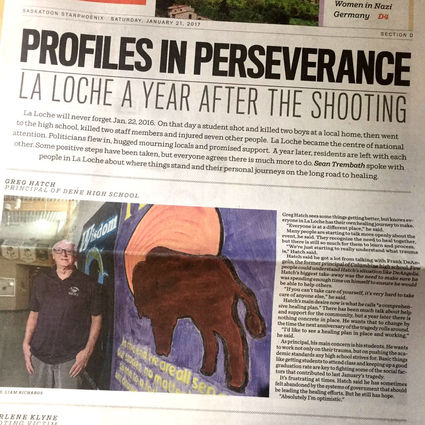 It's been a year since the tragic shootings in LaLoche, SK, and the school and the community are still recovering. The school principal says that they feel like they've been abandoned. Above is a photo of a news article in a Saskatchewan newspaper on the one-year anniversary.

LA LOCHE, SK-It's been just over a year since this northern Saskatchewan school was hit by a deadly shooting in which a teacher and teacher's aide were killed and seven people were wounded.

The shooter also killed two brothers before going on a shooting spree at the school.

Since that tragic day, the principal says that staff and students feel like they've been abandoned.

According to Principal Greg Hatch, the school received some help at the time of the shooting but after about a month, the school was left on its own to make it through the rest of the year.