An Ojibwe elder shares his discovery of help and hope 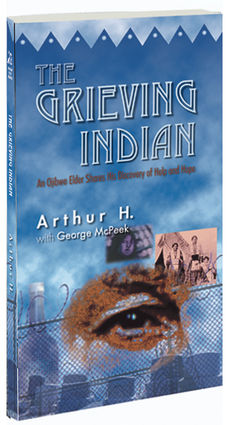 by Arthur Holmes with

The Grieving Indian is a gripping story which accents the problems Native Americans face. The Ojibwe have the most severe problems because they were a small group and not granted a reservation. They were left to shift more or less on their own. After much neglect and mistreatment as children and teenagers, struggling with alcoholism for many years, as adults were finally able to gain the victory over alcohol.

The Ojibwe are interesting to me because as a child between eight and eleven years of age, our family lived in northern Wisconsin, not far from the Ojibwe. Some of them worked in the logging camp where my father worked one winter.

"My Ojibwe Indian name is Shingwauk, which means 'a tall pine,'" writes Arthur Holmes on page 9. "But I have not always lived up to this name. There were many years when mine was a sick and shattered world. My life was totally broken to pieces. In those days, I stood tall only in body. My soul was mired in the deadly depths of alcoholism and spiritual deadness. It is only by the grace of God and the wise actions of a loving wife that I am alive today. Because they stepped in, I was spared from being another Indian statistic. Without them, I would have died a victim of acute alcoholism, brought on in part by the lingering effects of grief over a neglected childhood."

After struggling for many years with his alcohol problem, the loss of many jobs, divorce from his first wife, divorce twice from his second wife, and marriage to a third, he finally, with the help of the third wife and his minister brother triumphed over the habit. He took special training for counseling dependent people, and became a counselor. He helps Indians to come to grips with their habit and find deliverance.

Related to the subject of this present book he came to a clear understanding that the gospel included both the atoning death and life-giving resurrection of Christ.

He gives a sample dedication prayer... "Dear God, I have done many things that are wrong in Your sight. I am a sinner and I need Your forgiveness. I believe Jesus died in my place, that He was buried, and that He rose again on the third day to make us right with you. I believe the blood of Jesus can make me clean from all sin and as the Lord of my life, I pray that You will not only forgive me, but that You will also give me a new heart so that I will be able to forgive others who have harmed or hurt me. Thank You for giving me life that lasts forever, and helps me know for sure that I am now a child of God. I am asking You for all of this in Jesus' name. Amen."

Very few books that I have read give such a clean and consistent view of the good news of Jesus, including His resurrection, than this book.

Dr. Robert R. Dawson was the author of Whatever Happened to the Resurrection? The latest edition of The Grieving Indian includes an epilogue written by Art Holmes' daughter, Lauri Holmes Andersen.

by Frank and Marie Drown

This is a true story and it's easy to read. It's a good account but a sad one and it made me cry.

Frank and Marie joined Avant Ministries (formerly Gospel Missionary Union) in 1945 and served with them until 1982. They worked with the Shuar people of Ecuador telling them about Jesus.

Later they met Nate Saint, a pilot who flew a team of missionaries into the jungles to encounter an uncontacted tribe. Days later, Frank was asked to lead a search party to find five missionary men who had gone missing in the jungles. Jim Elliot, Peter Fleming, Ed McCully, Nate Saint, and Roger Youderian. They were found on January 8, 1956, dead. They had been killed by the Waodani Tribe (formerly known as the Auca). News of the deaths flashed around the world.

The search party buried these five together in the jungle.

The Drowns' daughter-in-law, Kathy Saint Drown, wrote: "My father-in-law with the help of my mother- in-law's complete support, was willing to risk his life to search and go on as a living sacrifice."

Steve Euler from Grace Baptist Church in Chattanooga, Tennessee writes: " Whatever blanks may occur in Elizabeth Elliot and Steve Saint's story...Frank and Marie Drown have more than connected the dots and have written a compelling and insightful retelling of the events of January 8, 1956."

Elizabeth Elliott, widow of Jim Elliott, wrote two bestselling books about the martyrdom of these five missionaries-Through Gates of Splendor and The Shadow of the Almighty. Steve Saint, son of Nate Saint wrote a book years later entitled The End of the Spear which also became a movie.

Bonus pictures are included in this little book.

Both books are available from Indian Life. 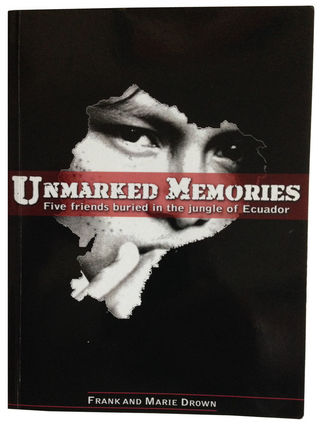