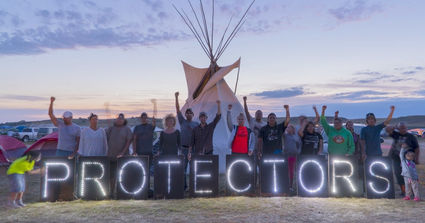 Vincent Viola, a wealthy businessman with no experience in First Nations issues is slated to oversee the federal agency whose handling of the Dakota Access Pipeline has come under repeated criticism. He went from a humble immigrant background to the founder of a highly-successful financial firm in New York. The Army Corps also joined the Standing Rock Sioux Tribe, the Cheyenne River Sioux Tribe and the Yankton Sioux Tribe in seeking a suspension of their separate but related claims against the agency.

NEW YORK, NY-A wealthy businessman with no experience in First Nations issues is slated to oversee the federal agency whose handling of the Dakota Access Pipeline has come under repeated criticism.

Vincent Viola went from a humble immigrant background to the founder of a highly-successful financial firm in New York.

"Whether it is his distinguished military service or highly impressive track record in the world of business, Vinnie has proved throughout his life that he knows how to be a leader and deliver major results in the face of any challenge," Donald Trump said in a press release December 19.

A huge legal, political and public relations challenge will be facing Viola should he be confirmed as Secretary of the Army. The post exercises direct authority over the U.S. Army Corps of Engineers, the agency that holds the fate of the $3.8 billion crude oil pipeline in its hands.

Officially, the project is on hold in order for the Army Corps to conduct a more thorough review of the final portion of the pipeline in response to concerns raised by the Standing Rock Sioux Tribe and its many allies. Oil spills, treaty rights and even a potential reroute away from the reservation in North Dakota are to be considered during the environmental impact statement

"We've denied the easement for the crossing for DAPL. We're going to start the NEPA process soon," Charles "Chip" Smith, an official with the Assistant Secretary of the Army for Civil Works, told the Inter-American Commission on Human Rights at a hearing on December 9.

With the new administration coming on board January 20, the Army Corps doesn't have much time to get the ball rolling. It's crucial for the review to start soon because it would be difficult-though not impossible-for the incoming administration to change course.

"An arbitrary order from the new White House to issue the easement-despite the Army Corps' statement that further work is needed- would be illegal and would subject the decision to close judicial scrutiny," attorney Jan Hasselman, who is representing the Standing Rock Sioux Tribe in federal court, stated. "Together with the tribe, we are prepared to defend the Corps' decision and challenge any effort to reverse it."

"As we look and see what is going on in North Dakota with the pipeline, the Sioux people are in for a long fight," Chairman Harry Barnes of the Blackfeet Nation said in Washington, D.C., where he celebrated the protection of the tribe's sacred lands in Montana from energy development after a decades-long effort that spanned three presidential administrations.

Separate from the pending environmental review, the Army Corps has to defend itself from a cross-claim filed by the wealthy backers of Dakota Access.The firm argues that it has a right to drill under the Missouri River, less than a half-mile north of Standing Rock, despite lacking the easement that was denied December 4, 2016.

The Army Corps also joined the Standing Rock Sioux Tribe, the Cheyenne River Sioux Tribe and the Yankton Sioux Tribe in seeking an "abeyance" [suspension] of their separate but related claims against the agency. Judge James E. Boasberg agreed to the request as he prepares for a hearing in early February on the easement.

By that time, though, Mr. Trump will be in office. "None of us have any idea whether the incoming administration will make any or all of this moot," Boasberg said on December 9.

He quickly added: "It's not my business to guess."

Beyond the legal and political realms, the new Trump administration will have to face the public, which has rallied behind Indian Country in its effort to stop the pipeline from crossing the Missouri River. Tribal activists, ranging from youth to elders, aren't giving up and their defiance turned the #NoDAPL movement into an international and celebrity cause.

"To fight for our way of life and we will be here, on this land, to stand up for our people, for the water, for the land," said LaDonna Brave Bull Allard, a member of the Standing Rock Sioux Tribe.