Keeping our history on the leaves of memory

North America's First Peoples and that of the European settlers could not have been more different. The settlers came predominantly from Western Europe where knowledge was supreme but the Indigenous peoples came from the western hemisphere where wisdom was foremost... 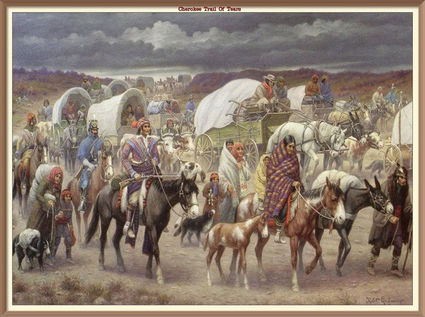 Few non-native North Americans know First Nations peoples' real story. They know nothing of the hundreds of broken treaties, the senseless massacres, or the deliberate spreading of smallpox that killed them by the thousands. Nor do they know what really happened at the Little Bighorn, Wounded Knee, the Trail of Tears, the Sand Creek Massacre, the Long Walk, or Crow Creek. "The Trail of Tears" painting by Robert Lindneux in the Woolaroc Museum, Bartlesville, OK.

Adapted from BIRD WITH BROKEN WING

"The shared past is a complicated place," someone wisely observed, "we need to listen to many voices."

The history of North America written by the white man for history books is always written by the victors. Flattened out, and treated as a single story, Native Americans were simply "air-brushed" out of American history, literature, and culture, even though they lived upon this land far past living memory, deep into the time of legend.

"Irreparable damage has been done by white writers who discredit the Indian," wrote Luther S...