By Film Reviews by Willie Krischke 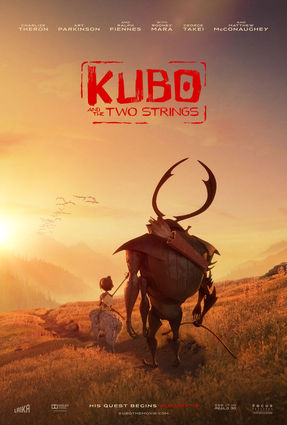 This film is a visual feast that you won't want to take your eyes off the screen for even a second. A movie that doesn't look like any other.

Kubo and the Two Strings

"If you must blink, do it now." That's the first line of "Kubo and the Two Strings, spoken over a dark screen, and it's good advice, because what follows is a visual feast that you won't want to take your eyes off for even a second. Director Travis Knight and the LAIKA animation team have seamlessly blended stop motion and digital animation to create a movie that doesn't look like any other.

Young Kubo is a storyteller with the magical ability to make paper turn and fold itself into swirling origami images of the tales he's telling. It's thrilling to watch, and the way he tells stories is not all that different from the way his story is told. I don't think anything but Kubo's origami is actually made out of paper, but there is, nonetheless, a tactile sense to the animation, that gives it both a sense of gravity and wonder.

Based on a Japanese folktale, Kubo sets out on a quest to recover magical armor that will protect him from the Moon King, who is also his grandfather. The Moon King wants to blind young Kubo, believing that his ability to see is what keeps him tethered to the physical world and unable to join the world of spirits his grandfather inhabits. In the grand climax, Kubo tries to convince him that it is not his eye, but what his eye sees – the beauty and the glory in the people he loves – that keeps him in this world. The world may be full of brokenness and suffering, but that's not the whole story.

Unfortunately, the narrative of "Kubo and the Two Strings" isn't quite as compelling as the animation. There's a big reveal about halfway through the film, and roughly from that point on, the story gets a little shoddier. The movie's chief problem is its inconsistent relationship with memory and the past; Kubo says that memories are the strongest kind of magic. But we have two characters who have lost their memories; one can sort of figure out what kind of man he was, based on flashes and associations, the other, we're supposed to believe, can become a different person if he's told a different story about himself. By the end, it's clear that while "Kubo" isn't a great movie, it's a great-looking one.

Songs My Brothers Taught Me*

Set in our time on the Pine Ridge reservation, "Songs My Brothers Taught Me" is about the people who get left behind. Not in the apocalyptic sense, but in ordinary, every day ways. The film is full of aftermath scenes-of the charred sticks, that remain after a house fire, or the beer cans strewn on the basement floor after a party. The fairgrounds after the rodeo has come and gone. Almost all of these scenes are encountered by Dakota Brown, who is 11 but pretends like she's 13, a kid on a pink bike who must piece together, out of the debris and the detritus, what happened and what it means for her life.

Dakota's father dies near the beginning of the film. She barely knew him. He was a locally famous bull rider and a ladies' man; he had 25 children with nine different women. It's darkly humorous when they all gather together for his funeral, each carrying a puzzle piece of their father, trying to put them all together and figure out who he really was.

Johnny (John Reddy) is Dakota's father figure, an older brother she's grown up with. These two have taken care of each other from a young age. But Johnny is trying hard not to get left behind; his girlfriend (Taysha Fuller) is headed off to college in California, and he's determined to go with her, though he doesn't have a car, a job or a place to stay. None of that bothers him much; he'll figure it out. What does bother him, though, is that going with her means leaving Dakota behind. For Johnny, the choice is either leave someone you love or get left by someone you love. 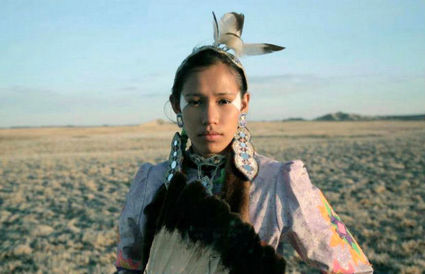 Dakota Brown is 11 but pretends she is 13 with a pink bike made from junk and what it means for her life.

At first, I thought "Songs My Brother Taught Me" was going to be yet another artsy "slice of life" film about life on the reservation, the kind that always feel like they're made for outsiders. But as its layers started to reveal themselves to me, I saw a deeply insightful film, one that those living on the reservation might relate to. It's a film about the tension between leaving and staying. Staying on the land you love, with the people you love, in a place where hope is a rare commodity, or leaving for the city, for the rodeo circuit, for the grave and the world beyond. It's about the combination of joy and sadness when you see someone leave, and the same combination when you see them stay.