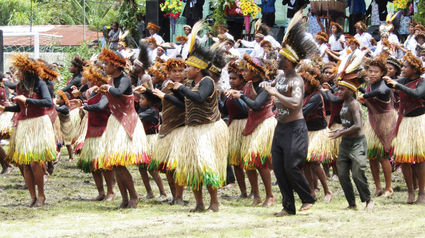 The 53rd anniversary celebration of the Indigenous church in Wamena, Papua, included traditional songs, tribal dances, and dramas retelling the birth of the national church in the central region of Papua. The Indigenous church is very proud of its Papuan origins, their multiple languages, their traditional songs, and the feather headdresses featuring the native bird of paradise plumes.

On Sunday February 14 2014, GIDI celebrated their 53rd anniversary. It was held in the soccer stadium in the highland town Wamena, and attended by thousands from all over the central region of Papua. In addition to a number of speeches and a sermon, we had a choir leading the audience in a number of songs-all composed by GIDI members, and some of them in tribal languages. One by the late Yali leader Otto Kobak, which is about having received the gospel in the mountains and valleys of Papua, and taking it to the world. It is a song with a lively tune and is sung with vigor-a favorite....