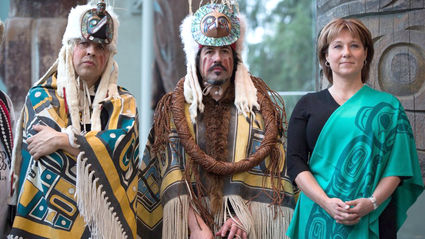 Dancers from the Nanwakolas Tribal Council stand alongside British Columbia Premier Christy Clark as she announced the Great Bear Rainforest agreement that she says will protect "a global treasure".

VANCOUVER, BC-A group of First Nations in British Columbia signed an agreement to protect their territory from logging.

The deal bars development on about 85 per cent of the Great Bear Rainforest. Logging can occur on the remaining 15 per cent but only under strict conditions.

"Over the last 10 years we have worked with stakeholders and the Province to complete a common land and marine use vision for both the Great Bear Rainforest and the Great Bear Sea," said Dallas Smith, the president of the Nanwakolas Tribal Council, which represents six Native governments. "We are happy that...