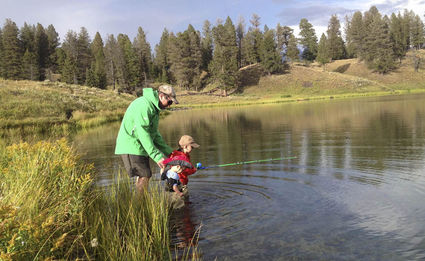 Steve started fishing when he was a young boy. Later in life, he began "fishing" for a wife. Like fish, some he would throw back, but some would throw him back in as well. He finally put up his fishing rod for good when he married the love of his wife in 2015.

My son has been single for 29 years. Since flying from our nest he has kept a fairly clean house, done his laundry and become adept at cooking. Although he does show up at our house often just to gaze into the fridge and drool. But a grown man can only eat so much of his Mother's lasagna before she sends him out to pasture.

He lost weight in the pasture and began considering marriage. Before long, he had more dates than a palm tree. They came from online dating services, surveying the field, fishing the pond. He threw some fish back in, some threw him back in as well. "What do you look for in a wife?" he asked me. "Well," I told him, "why not put a classified ad in the newspaper. I did years ago. It said, 'Wanted: good woman with tractor. Please send picture of tractor.'" Steve laughed. And showed me of things he would like in a wife. Here it is:

"Must love Jesus, must love kids, strong character, compassionate, beautiful, must be crazy about me." Some secondary stuff: "Athletic, musical, adventurous, confident..." The list went on awhile. You could never fault the boy for setting his sights too low. And off he went with his tackle box and fishing pole.

There were days he'd walk through our door with a grin to tell me about a girl he met. "I think she likes me," he'd say. "Maybe she's the one." And I remember the tears when relationships fell apart. It's not easy being a dad, watching your son's heart break. "Maybe I set my sights too high," he admitted one day. "Maybe love is about compromise. What if that girl on my list is just a mythical creature? Maybe I just need a good tractor." Mostly we prayed for him, as we'd done almost every day since he was born.

And then, suddenly, he hung up his fishing pole. I don't know how else to put it. He stopped chasing girls and started chasing Jesus. And something happened. There was a remarkable change. He loved telling others what Jesus had done in his life. Random people. In malls. On park benches. He did it in a way they loved. And there was contentment in his eyes. "Maybe the boy was designed to be single," I told my wife. "The apostle Paul was single. Jesus too. My great uncle Edward was single. Let's be thankful and supportive."

Then one May day in 2015, he saw her. Sitting one row behind him at a conference, worshiping Jesus. He didn't know she worked with youth, that a mutual friend would set them up, that two weeks later they'd be sitting in a restaurant, and that Dallas would cause him to throw out his list. "She's all those things and more," he told me. "She doesn't own a tractor, but I can overlook that."

The boy could hardly walk in a straight line for three months and on July 31st, he dropped to one knee on a mountain peak after a stunning sunset. Four friends provided background vocals as he serenaded her, "Dallas, will you marry me?" She said, and I quote, "HECK YES!"

Ask Steve, he'll tell you it hasn't been easy, but it's been worth it. "Be patient," he'll say, "and don't compromise. Seek Jesus first, and don't stop praying. God hasn't forgotten you." One of Steve's favorite Bible verses is Matt 6:33: "But seek first the kingdom of God and his righteousness, and all these things will be added to you." Whatever you face today, would you trust Him, my friend? Meanwhile, you'll have to excuse me. I have a wedding to prepare for. My son has finally hung up his fishing rod, put on a suit, and is about to step away from our fridge. His mother and I couldn't be happier. Imagine all the money we'll save on groceries.

Phil Callaway is a speaker, best-selling author, and host of Laugh Again Radio. Check it out at laughagain.org