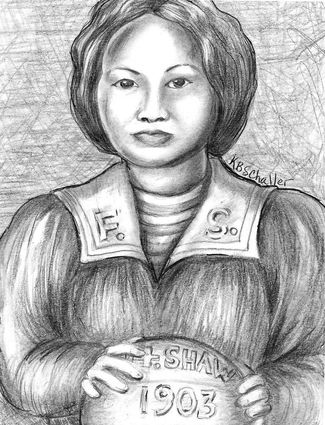 Josephine Langley, Blackfeet, coached the Fort Shaw Ten Women's Basketball Team that went on to become World Champions in 1904 and were known as the "World's Greatest Women's Basketball Team". Next time you are driving near Great Falls, Montana, take time to visit the monument built to commemorate this victorious time lead by Coach Langley.

When William Winslow, M.D., arrived at abandoned Fort Shaw (Montana) in April 1892 to start an Indian School, he immediately instituted physical culture classes for boys as part of their overall curriculum. Although he dreamed of the same for girls, he had no one to teach them. That is, until December 1895 when Josephine "Josie" Langley returned to Fort Shaw after an illness and resumed her position as Indian assistant.

Herself an aspiring teacher, Josie's accomplishments would become part of "an idea whose time has come", for during the time she had spent at the Carlisle (Pennsylvania...