Sitting by the windows and waiting, watching out over the bay towards the narrows for the trappers to come round the bend and into sight. It was exciting to watch the dog teams rounding the bend. Every team was different, some had bells and colorful embroidered blankets across their backs and we could recognize the team by the dogs.

My hometown village wasn't much to brag about-no roads, no cars, no airport, no fast food restaurants or movie theatre. All we had was an outdoor toilet, a cozy home with family and friends and nothing but time to spend with each other. But it was my best-ever hometown village.

The houses sat on the top of the round bank in a neat row along the bay. The homes along the path ran along the top of the bank like clothes pins on a line linking us one to another. A log church sat in the middle of the village. Sitting at the table, you could see everyone and everything that went on in the village. We knew who were where and who did what when. Aunty Bertha was the town keeper and she knew everything and everyone.

We were set in our ways. Every household had an outdoor toilet without toilet paper. You used the Sears and Eatons catalogs and you dared not take or use anyone else's pages. Each family owned a wood pile that you could see from your kitchen window. You knew exactly how big and wide and how many logs were on your wood pile.

As an extension from their home, families had their own waterhole just below the hill in the frozen lake. You dared not use any but your own otherwise you were deemed lazy, living off someone else's hard work. Some were a neat square, some were small, some but a trickle, not quite enough to get a dipper in. When it was forty below and the ice was two feet thick, getting water from the lake was part of our livelihood and was not easy to keep open-most people used an axe.

Oh, but Aunty Bertha's waterhole was the best. She had a big round six-foot-long chisel that sat at the edge of her waterhole. No one, I mean no one, borrowed it. It sat there on the ice by the waterhole for us to gaze upon longingly. It quite often was the talk of the town. Now, really, how much would it hurt to lend it when the weather dipped below forty and the ice was frozen solid? Bertha never budged.

Christmas was always a time of excitement. Sitting by the windows and waiting, watching out over the bay towards the narrows for the trappers to come round the bend and into sight. My uncles and cousins had spent long winter months on the traplines collecting their furs for trading. Their families spent many anxious hours by the kitchen windows waiting for my uncles and cousins to come home. It was worrisome because anything can go wrong when you are alone in the bush.

It was exciting to watch the dog teams rounding the bend and then come into the bay and up the hill from the lake. Riding in, standing tall and straight on the backboards of their dog sleigh loaded down with furs; they were proud of their winter hunt. Every team was different, some had bells and colorful embroidered blankets across their backs and we could recognize the team by the dogs. Watching as they drove up to their home and observed the heartfelt joy of family reunion as they rushed outside with greetings of hugs and slaps on the back.

My, what a holiday! They were home for Christmas. It was our celebration. The Christmas tree was real with silver strips of tinsel cut from cigarette liners. Christmas was not so much for toys and material goods but a celebration of family reunion, safety, a good hunt, abundance of furs to pay the tab at the Hudson's Bay Store.

We could hardly wait, standing around smelling the beautiful aroma of turkey dinners and fresh bread. Family meant everything in our small close-knit village.

Many wintry nights were spent sitting on top of logs that were placed across the sawhorse while my step-dad Andre, sawed wood for our home. Taking turns we sat by the hours weighing down logs, getting off, moving the log over for another cut. It was sawed into stove size then chopped by hand, then carried by armloads into the house.

Winters were long and frigid but a familiarity that held us in its grip was ours to grasp and hold to overcome and we didn't mind. It was our way of life: we were familiar with it. Our fish was stacked like cordwood in the back warehouse against the wall. Grabbing one by the tail I'd swing the fish that was just about as big as I was, bringing it in for supper. It was also used for dog food. Our winter meat of caribou was also kept in the warehouse.

Living in the North brought sights and sounds familiar to that area. The Northern Lights danced across the sky, displaying vivid colors over our otherwise drab surroundings. There's nothing like hearing the peaceful call of the loon in the early morning light over the silent misty water as we paddled in our canoe over the still water.

For contrast, there was the unsettling howl and unbroken lonesome call of the wolves in the distant hills during a quiet evening and the owl breaking the silence of the forest on a dark night with its soft hoot.

There are times when my heart still longs for those special sounds of the North and the special display of nature. I can hear the silence as it hugs you so tightly you can feel it as the North wraps its arms around you, the feeling of welcoming like no other place on earth. You either embrace it or hate it. Embrace it and it becomes your companion. Hate it and it will destroy you.

Jack Frost was my friend. He made my heart leap in the morning. I would bound out of bed, run to the window to see what kind of picture he painted for me during the night. There was always something different and fascinating. You would have to look at the picture first thing in the morning before the heat melted ice and frost away. Some were so pretty and enchanting.

I was sad when the house started to get warm. The heat melted frost and ice; water ran down to the window sill, erasing the picture. But my artist friend would come back to paint me another picture. Each day brought something new and I longed to touch it. Instead they were just for looking at for when I touched it the warmth of my hand melted the picture on the window pane. 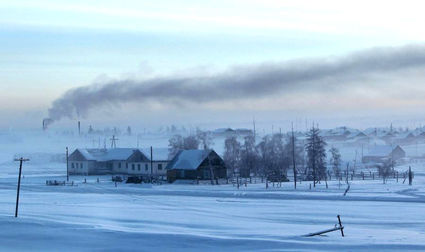 There are times when my heart still longs for those special sounds of the North and the special display of nature. I can hear the silence as it hugs you so tightly you can feel it as the North wraps its arms around you, the feeling of welcoming like no other place on earth. You either embrace it or hate it. Embrace it and it becomes your companion. Hate it and it will destroy you.

Life is like that. So many times I felt I knew what was best for me and left my handprint of my strong will, not caring who it hurt and ended by hurting myself. In my many struggles, I have learned it's not OK to be selfish even when you are hurt. I have blamed others for the poor choices that I have made and hopefully have learned from them.

Sometimes it is easier to forgive others than it is to forgive yourself. But the best part in life is that it is new every morning. You can ask God to help you draw a new picture.

My favorite Bible verse is, "I know the plans I have for you, they are good plans to give you a hope and a future."

Our job is to trust God for those plans and not take things into our own hands and make a mess of everything. Sometimes that's not easy.

© 2015 Rita Gloria Holmgren Anderson. Adapted with permission from Yesterday, Rita Anderson's book due to be released in November. For more information, please check out the ad on page 12 or contact Indian Life Books.