By Film Reviews by Willie Krishke

Double Feature: Animation verges on the miraculous and an action flick that's everything it should be

Inside Out and MI: Rogue Nation 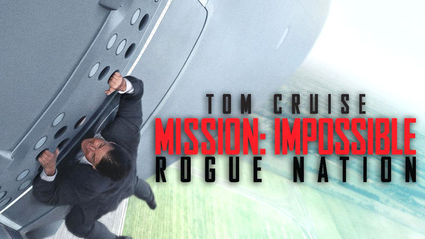 Ethan Hunt is on the run again, as the IMF is being shut down by CIA director Alec Baldwin, who is convinced that the shadow organization Hunt is chasing is nothing but shadows. Seems like this guy can never catch a break or just carry out a normal mission. He's always got to save the day and prove that he was necessary in the first place and this time he does so by hanging onto a military cargo plane and Cruise performs the stunt himself.

What's my favorite thing about Pixar's excellent new film, "Inside Out?"

All the way home, my six-year-old was using the basic concept to talk about things that have been going on lately with her own emotions. A few days later, she was building her own personality islands with Legos, and telling me about the core memories that powered each island. Because we watched this movie together, I know my daughter better. I understand better what is happening inside her head. That's not just great, it's verging on miraculous.

The center of "Inside Out" is Riley, an 11-year-old girl who is in the middle of a major transition. Along with her parents, she is moving from the iced-over lakes of Minnesota to the crowded hilltops of San Francisco. Inside Riley's head is an entirely separate cast of characters, who help her process everything that happens to her. There is bright and bouncy Joy in her Tinkerbell dress, and turtle-necked, bespectacled Sadness. Also Anger (Lewis Black-is this guy ever allowed to be happy?) who looks like an inflamed tooth, and Fear, and my favorite, Disgust (Mindy Kaling).

The plot is pretty basic (and more or less the same as Toy Story). Joy (Amy Poehler, bringing her combination of cheeriness and oblivion straight from "Parks and Recreation") and her least favorite companion, Sadness (Phyllis Smith), get separated from headquarters, and must make their way back before something terrible happens. Those left at home do their best to keep things in order, but are terribly, comically inept. Along the way, Joy discovers that Sadness isn't so bad after all, and in fact, may be necessary for Riley to understand what's happening to her.

But the world building is fantastic. I can't wait to see "Inside Out" again because I know there are a plethora of things I missed or didn't fully understand the first time around. Joy and Sadness spend time in Riley's imagination, where they meet an almost forgotten imaginary friend, Bing Bong. They stumble into Abstract Thought, and make a hasty exit. And, of course, there are the Personality Islands, the memory orbs, and the dark, scary Subconscious. This is great stuff.

I think you'll be hard-pressed to find another movie this year, for kids or adults, that is more psychologically insightful, creative, perceptive, and, in the end, wise. I'm looking forward to the conversations I'll continue to have with my six-year-old thanks to this movie.

In "Misson: Impossible-Rogue Nation," Ethan Hunt is on the run again, as the IMF (that's Impossible Mission Force, not International Monetary Fund) is being shut down by CIA director Alec Baldwin, who is convinced that the shadow organization Hunt is chasing is nothing but shadows. Seems like this guy can never catch a break or just carry out a normal mission (this might be the only way "Mission: Impossible" differs from the Bond movies: nobody's ever trying to shut down the British Secret Service). He's always got to save the day and prove that he was necessary in the first place. It's hard work being an IMF agent these days but it also looks like a lot of fun.

Say what you want about Tom Cruise-and a lot of different things can be said about him-he really pours himself into the M: I movies, and it shows. A lot of ink has been spilled about the stunts he did himself - he's become this decade's Jackie Chan, which makes you wonder what has become of Jackie Chan. And those are impressive and add a real sense of thrill to the movie, but I'm at least equally impressed by the choices he's made as producer.

Cruise was also involved in the casting of two virtual unknowns into big roles, and both of those choices pay off marvelously. We've got a solid bad guy, played by raspy-voiced Sean Harris, who reminded me more than a little of Mads Mikkelsen in "Casino Royale." And Rebecca Ferguson is fantastic as the femme fatale, sometimes working with Hunt, sometimes against him, always mysterious and intriguing. She comes awfully close to stealing the movie from its star. 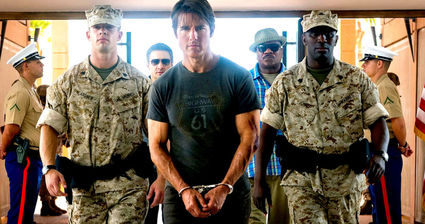 "Rogue Nation" makes great use of exotic locations, like an opera house in Vienna and a villa in Morocco, that just add to the fun. I'll happily say a lot of good things about the Marvel Cinematic Universe, but one knock against it is that it's never figured out how to make a great-looking movie like this one.

What can I say? I'm a sucker for action heroes in evening clothes shooting things at each other inside and around thousand-year-old buildings. 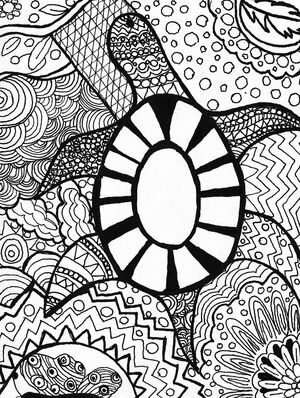