"Look to the North" Grandfather said 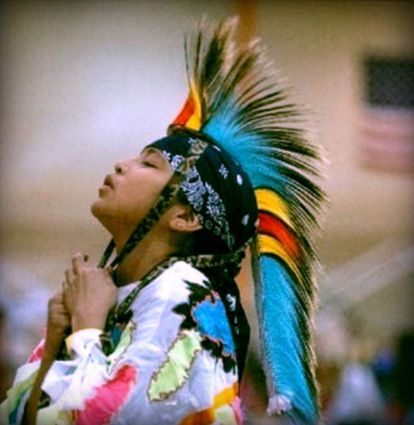 Annusik listened. He loved his Grandfather's voice. "The Great Creator is generous and must not be angered, so that there will be plenty of meat for us and those who follow after us. Breathe the fresh air into your chest, Annusik," said Grandfather. "It keeps us strong. The summer wind will cool our brow." He felt the Creator's love in the warm sun. The fresh air filled his chest and he felt strong.

Annusik was being taught the tradition of oral story telling by his grandfather, a wise Elder. "I am a story teller of the old ways," said Grandfather. "Listen to what I say. I will teach you what the Elders have taught me from our ancestors who went before them. They were the keepers of this territory of the Great Slave Lake. Elders are very important in the First Nations culture. They have lived longest and gained the most experience and wisdom," Grandfather explained.

As soon as Annusik was old enough to understand a few words, Grandfather lifted him high onto his shoulders and began teaching.

Annusik listened to the sounds of his grandfather's words, even though he didn't know their exact meaning. He knew his Grandfather spoke of traditional things that he must learn. Grandfather said: "I want to teach you, Annusik, what has been passed to me from the old ways. The skills for survival. Hunting, building shelters, sewing of warm clothing, making tools, and safe medicines.

Most important, Annusik, you must learn to respect our Great Creator. All we need comes from this land, provided by our Creator," said the wise Elder. "The caribou, bison, wolf, and bear provided fresh meat, and dried pemmican. Antlers, and bones were used for tools in the very early days," Grandfather patiently told him.

"Large skins were stretched for tent making. Fat was used as fuel for warmth and cooking during long winters."

Annusik listened. He loved his Grandfather's voice. While Annusik was young, he sometimes wanted to race or play games with his cousins. However, Grandfather was getting older. He was eager to teach Annusik as much as possible before his own journey. Grandfather was firm with his teachings. "The Great Creator is generous and must not be angered, so that there will be plenty of meat for us and those who follow after us." He opened his arms wide.

"Breathe the fresh air into your chest, Annusik," said Grandfather. "It keeps us strong. The summer wind will cool our brow."

Annusik copied his Grandfather and opened his arms wide towards the sky. He felt the Creator's love in the warm sun. The fresh air filled his chest and he felt strong. Summer wind blew the hair away from his forehead.

"Be sure nothing goes to waste, Annusik. It is a very important lesson to learn."

Whenever Grandfather waved his hand, nodded his head, Annusik knew from a young age: 'It was so'.

Just after sunrise one morning, Grandfather called for his grandson to wake up. "Look to the North, Annusik. Mount Mackenzie is the largest and tallest mountain in Canada. No one climbs to the top. It is believed that our Great Creator is keeping it pure from glory seekers who would trample its delicate beauty."

One day about lunch time, when they stopped fishing, Grandfather stood with Annusik on the shore. Now Annusik's shadow was taller than his grandfather's.

Grandfather shielded his eyes from the noon brightness. He pointed at the river that ran as far as their eyes could see and continued around the mountain.

even when he is older, he will not depart from it.'

Grandfather said: "There runs Canada's longest river, the Mackenzie. It too, is an important gift the Creator has provided. It flows as a gentle giant of its kind, from Great Slave Lake North, steady, to the Arctic Ocean. It holds a plentiful supply of fish and has filled our bellies, and the bellies of the wildlife we hunt.

This has been the way, since time began. If we are as wise as our ancestors, there will be enough for your children, their children, and so forth."

Annusik nodded his understanding of all that his Grandfather spoke about.

"These traditions must be followed to keep the balance for generations to come."

Annusik knew he was prepared for the time when Grandfather would no longer speak of these things. It would soon be Annusik's turn. He appreciated more than ever, the ways and wisdom of his Grandfather's teaching. From daybreak to sunset, Annusik submitted to Grandfather's storytelling.

Grandfather felt his teaching was needed before his voice left him. By now, Annusik had become a skillful hunter but he honored Grandfather's wisdom.

The leaves turned colors. Summer wind had left to make way for the season of autumn. Grandfather said: "See the birds in flight for the great migration? They have wisdom in their flight from the North to the South. They help by telling us ahead, before the North wind turns the land around us, into ice and snow.

Look to the North when you hear the birds' farewell message about the time the leaves fall to cover the earth for its rest. If you are far from home, you will need to know. It could save your life."

Grandfather stretched his arms up and placed his hands on Annusik's shoulders. "Look to the North, Annusik. Always know where it is. By night a star will guide your journeys. Remember my words, Annusik. They are important."

Annusik waved his hand and nodded. Grandfather did the same. 'It was so'.

In winter, Grandfather and Annusik were checking the trap lines, Grandfather said: "Respect this great white North, Annusik. It can be as plentiful as other seasons but use wisdom in the hunt. That way, there will be enough. Give time to replenish what you take and take only what you need," Annusik nodded.

"You will know spring is returning when new buds burst out on trees," Grandfather said. "They turn from the north, hungering for warmth of the sun and thirsting for rain from the Creator. Branches will stretch to the noon sun over our heads.

"Rejoice when you hear the migrated birds flying back from the South. Everything is born again, as Creator breathes in new life."

Grandfather's autumn season had come. He still spoke clearly, but his voice was softer. One day, while they slowly walked on a path through the woods together, Grandfather stopped and looked at the leaves shimmering on their branches. He said: "Annusik, you will never lose your way if you look to the North. By day, leaves turn their backs to the north and turn towards the sun."

Late in evenings, Annusik sat beneath the stars with Grandfather. They listened to the night calls. Grandfather was very old. Now his voice was a mere whisper. Annusik had to sit closer than ever to hear his words.

"This is the land of the never ending sky. By night, moving colors to the North, celebrate with dancing and will give you enough light to follow your trail home.

"Soon the great day for me is coming. You will no longer see me here."

Grandfather looked into his grandson's face. Annusik nodded and let him continue. "My spirit will help you remember all of these things at the times you need them. Great Creator will send messages: "Look to the North." Grandfather waved his hand. He was finished speaking at last. His turn had come to be still and listen for his Creator's call.

"It will be so, Grandfather. Thank you. I will remember and look to the North."

Several seasons passed. On a clear summer day, Annusik stood on the bank of the Mackenzie River. It was his turn to carry on the storytelling. Annusik spoke: "That way is the North. Grandfather taught me many things I needed to know about it. He was right," Annusik rejoiced as he lifted his fine young son onto his shoulders. His laughter like the bubbling river.

Annusik was careful to speak slowly to his son so he would be able to understand a few of his words.

Thank you to my parents. I was told this story and taught about signs and the history of the North from when I was about eight years old. My Dad was a great storyteller and he had heard these things and remembered them from his youth.

I remember writing parts of it down in my journal before I went to sleep when I was about 13-14. I wrote by flashlight under my blankets as I had done many times, so my parents wouldn't know I was still awake.

My tiny miracle was rediscovering my chest of art and writing hidden in our old attic 20 years after the house had been abandoned and my parents had passed away. My mother knew I would come back one day and this wooden chest had kept my early work, safe and dry.