Thousands march across Canada for Truth and Reconciliation 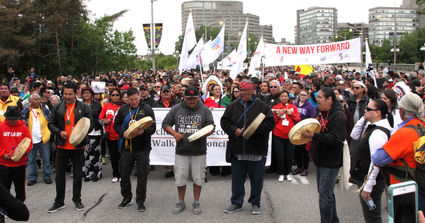 Over 10,000 Aboriginal and non-aboriginal people walked through the streets of Ottawa past the Parliament Buildings. Similar marches were held in cities across Canada as thousands marched in the Walks for Reconciliation. TRC Chairperson Justice Murray Sinclair stated that the work of reconciliation "...must be done in partnership."

OTTAWA, ON-The last week of May and first week of June were set aside for a national gathering of Aboriginal and non-aboriginal people who came together to pay their respects and honor the fallen-over 6,000 Native children and youth who died in Residential Schools over a period of about 150 years. It was also a time to listen, reflect, to apologize and to forgive and to learn how to begin the long process of healing.

Over ten thousand marched through the streets of Canada's capital city past the Parliament Buildings. This march was mirrored across Canada in Vancouver, Toronto, Edmonton...