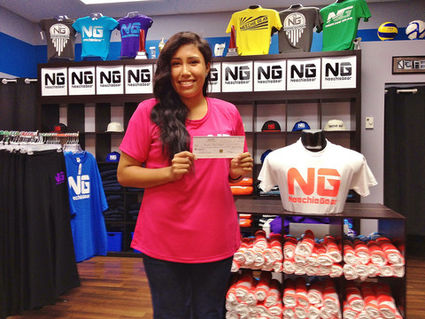 Neechi, "my friend" in Cree, was the brand name Kendal Netmaker came up with while he was in university. Neechi Gear is an award-winning business in Saskatoon, producing and selling lifestyle apparel designed to empower youth through sports.

Now at 27, he runs an award-winning business in the bustling city in the middle of Saskatchewan. He is devoted to raising a family, operating a store that employs five full-time personnel, and building an increasingly popular clothing brand especially with Aboriginal consumers.

With all the hard work comes recognition as Netmaker wins this year's National Youth Aboriginal Entrepreneur Award from Canadian Council of Aboriginal Business (CCAB), at the 17th Annual Toronto Gala, February 3, 2015, at the Fairmont Royal York Hotel, in Toronto. "Kendal Netmaker is founder and CEO of Neechie Gear, a lifestyle apparel brand built to empower youth through sports. He has successfully grown his business from a university project to a national name brand," says CCAB. In addition to business, Netmaker takes time to deliver an important message at motivational speaking engagements across Canada. Indspire lists Netmaker as one of their laureates this year, and Indspire organizers note that Neechie Gear sales contribute to underprivileged kids playing sports, and organizers and Netmaker has received both entrepreneurial and chamber of commerce recognition. Furthermore, "To date, his company has contributed over $15,000 in donations and has helped over 2,500 youth across Canada take part in sports," according to the Saskatoon Business Association.

"We appeared at the Canadian parliament as a group of Indspire laureates to be recognized by the nation's MPs," says Netmaker, "and it was three days after the shooting on Parliament Hill," (October 22, 2014). It's hard to imagine a more welcome award ceremony in Canada that week in the face of all the dread in the nation's capital. An Indspire gala was held in Calgary on February 27.

Netmaker grew up on Sweetgrass First Nation. Raised by a single parent, he came from a low-income family and had little opportunity to be involved in any extra-curricular activities, say Indspire organizers. "As a result, he felt compelled to give back by donating a portion of Neechie Gear's profits to help fund underprivileged youth, allowing them the opportunity to take part in extracurricular sports."

Neechie Gear Inc. store in Saskatoon is head office. "Our customers are first and foremost the Aboriginal population," plus they have customers from all walks of life at the store. "We have been running full-time for over four years. We sell the Neechie Gear brand wholesale to retailers. We market across the country through the Neechie Gear online store. We offer a sporty casual brand of clothing, hats and accessories," Netmaker explains.

"We help teams to outfit their organizations, and we are clothiers who created a brand to outfit men, women, and babies." The online store has a limited selection compared to what's available at their Saskatoon outlet and the other stores that sell the Neechie Gear line. He says the bread and butter is hoodies and sweat shirts, and the location attracts locals and tourists. Other marketing occurs through the Pow-wow circuit of the Cree and other Plains Nations and special events like the large and successful North American Indigenous Games in Regina last summer, "and we are presenters at various corporate events."

Netmaker's motivational speaking occurs in front of youth, young adults, corporate and business meetings, and community events. He talks about what drives him in business, "I have a lot of blessings to talk about," and the fact is winning competitions drove him into business. "I was a college athlete." He won a scholarship to play volleyball at Keyano College for two years and finished his degrees at the University of Saskatchewan.

As Netmaker describes his own motivation, he speaks to the expectations of others thinking about a business career, "First and foremost, entrepreneurs have misconceptions about the sacrifice it takes to make ends meet, there is less, free time, you will be completely devoted to the business."

It's a message that is popular and he receives good feedback from people who have taken the message to heart, "It sends people into business because it's a good business message."

Netmaker's mother instilled the fundamental values that carry a person through education, organized sports, and ultimately, private enterprise. Coming from a Cree community, Netmaker learned some of the Cree language. Netmaker and his siblings grew up playing organized soccer and other sports through their developing years, but it wasn't easy to find an organized recreational outlet. Netmaker's athletic ability was mentored by a family in Battleford.

Neechie Gear will continue to appear with fresh new designs but Netmaker says the clothing brand will stick to the winning products. The bottom line is an underlying purpose to create opportunities for youth to be involved in sports, because Netmaker is devoted to the development of skills for all members of society.

"Kendal has been part of, and witnessed what sports can do for youth by developing elite athletes and future leaders," say organizers at CCAB. "Today, Neechie Gear is committed to giving a portion of proceeds to help underprivileged kids to play sports. Together, we can change many lives through sports!"