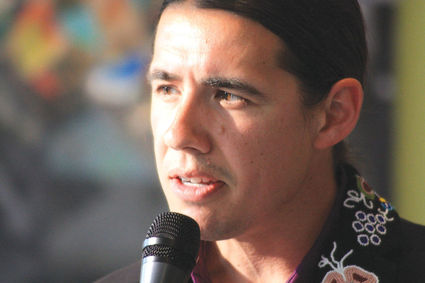 Fifty-five years ago, Indigenous Peoples in Canada received the right to vote for the very first time. This was a right that had been denied them under the Indian Act. To mark the occasion, candidates running in Canada's upcoming federal election spoke to people in their riding. Candidates for Winnipeg Centre, Robert Falcon Ouellette and Rebecca Chartrand spoke to a group on the importance of carrying out their civic duty. Ouellette stated that in the last election, only 39 percent of eligible voters voted. He and Chartrand urged the crowd to change that the next time around.

WINNIPEG, MB-On March 31, 1960, then-governor general of Canada Georges Vanier gave royal assent to the bill that gave Inuit and First Nations peoples the right to vote for the first time. This was a right that had been denied to them on reserves under the Indian Act.

To mark the anniversary, a celebration was held in downtown Winnipeg, hosted by Robert-Falcon Ouellette and Rebecca Chartrand two federal candidates for the Liberal Party in the expected fall federal election. Indigenous and non-indigenous supporters of the candidates showed up for the noon-hour event.