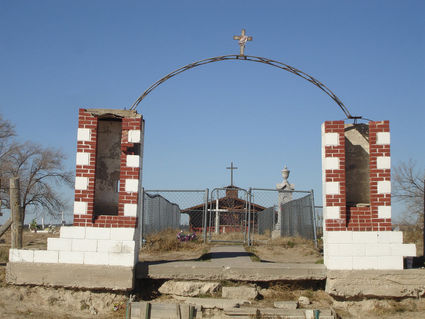 In 1986, a group of Lakota began the Si Tanka Wokiksuye (Chief Bigfoot Band Memorial Ride) to retrace the sacred journey of Chief Bigfoot in 1890. The original intent was to have a "Wiping of the Tears" ceremony to mourn for loved ones who have passed on. During the time of the South Dakota Year of Reconciliation in 1990, the participants of the Memorial Ride felt the need to continue the ride annually to honor Wounded Knee and to this day it continues as the Oamaka Tokatakiya (Future Generations Ride) and Chief Bigfoot Band Memorial Ride. Percy White Plume, an original rider and coordinator of the Ride, would like to have a rider on horseback for all those who perished on that frozen Monday at Wounded Knee in 1890.

WOUNDED KNEE, SD-On the 124th Anniversary of the Chief Bigfoot Band Memorial Ride the riders arrived at the gravesite of the 1890 Wounded Knee Massacre victims on the Pine Ridge Reservation.

This ride of over 150 miles began on the Cheyenne River Reservation and honors the more than 300 men, women and children slaughtered at Wounded Knee.

Beginning with the shooting death of Sitting Bull on the Standing Rock Reservation on December 15, 1890, a small band of Hunkpapa left to seek protection with Chief Bigfoot (Spotted Elk) and their Mnicoujou allies. Together, they began their jour...