The Song of Blue Water 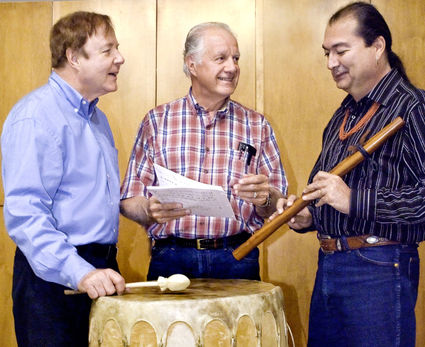 In 2006, John Michael Luther received a request from Doyle Prehiem (center) to write an original composition for the Sangre de Cristo Chorale. Native flutist, Ronald Roybal (right), first proposed the theme of "The Song of Blue Water." John and Ronald were discussing various topics for a new composition, when Mr. Roybal said, 'You should write a piece about Esther Martinez. She's a storyteller from the San Juan Pueblo. She recently died in a tragic car accident, the result of a drunk driver.'" That's how John came to write this composition.

Luther wrote, "We live on the ancient site of the Santiago Pueblo dating back at least 500 years. I have been told that our home is possibly the sight of Coronado's location when he lived in the Pueblo. Coronado's group campsite was on HWY 528, just a mile away from our home. Our cul-de-sac was the site of the pueblo's plaza. We have hosted lectures in our home by historian, writer, and professor, Dennis Her...