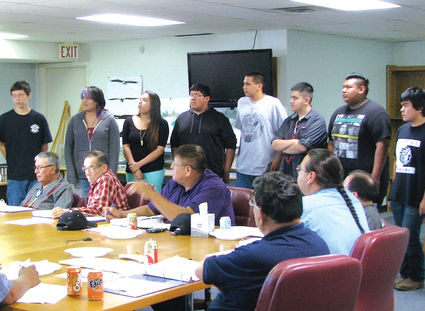 The White House Tribal Nations Conference Youth Ambassadors represent a diverse set of high-school aged Native youth. They were selected by the White House after nominations were sent in by tribal governments. Here Mathew Antone, second from right, and the Red Lake Youth Council present a report to tribal leaders.

Native youth traveled to the nation's capital in December to participate in the annual White House Nations Tribal Conference.

The White House Tribal Nations Conference Youth Ambassadors represent a diverse set of high-school aged Native youth. They were selected by the White House after nominations were sent in by tribal governments.

"As a Youth ambassador to the 2014 White House Tribal Nations Conference you are joining an inspiring group of youth from across Indian Country," a White House official wrote in an e-mail to one of the participants.

The Youth Ambassadors included Summer Brooks, a member of the Shakopee Mdewakanton Sioux Community of Minnesota. She chairs the tribe's youth leadership council and has been encouraging her peers to continue their education after high school.

"I'm really excited for this opportunity to expand my leadership skills and play a part in helping tribal governments and the federal government work better together," Summer said in a press release. She will attend the conference with Chairman Charlie Vig.

Mathew Antone, a member of the Red Lake Nation of Minnesota, is also participating. He sits on the tribe's youth council and is active in civic efforts on his reservation.

"Red Lake Nation is proud of Mathew's accomplishments and offers hearty congratulations for this recognition," the tribe said in a press release.

The 18-year-old high school senior from Blackwater is one of 36 youth ambassadors chosen to represent their tribes at the Tribal Nations conference.

Sydney Schad, a member of the Cheyenne River Sioux Tribe of South Dakota, is another ambassador. "It's an honor to be able to represent the youth at the national level, "the high school senior told The West River Eagle.

Also hailing from South Dakota is Janay Jumping Eagle, a member of the Oglala Sioux Tribe. She has dedicated herself to preventing suicide among Native youth.

"This is a great opportunity for me to help our youth get their voices heard at the national level," Jumping Eagle said on GoFundMe.

Dahkota Franklin Kicking Bear Brown, a member of the Wilton Rancheria, will be coming all the way from California. He started NERDS, Native Education Raising Dedicated Students, to help his fellow Native students boost their academic achievement.

"This is a huge honor and he wants desperately to attend!" his family said on GoFundMe.