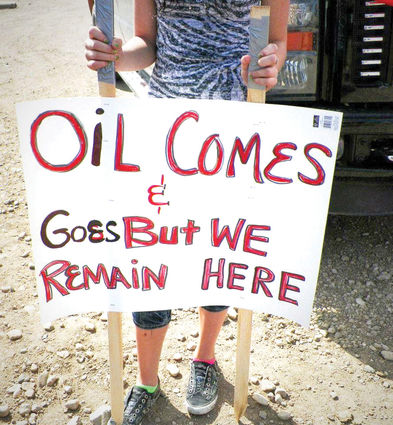 The Mandan, Hidatsa and Arikara Nation in North Dakota has collected about $1 billion in oil money and yet life for much of the NHA Nation is mostly bleak. Poverty, health problems, and drug abuse abound.

GRAND FORKS, ND-The Mandan, Hidatsa and Arikara Nation in North Dakota is in the middle of an energy boom but tribal members say they aren't seeing any of the benefits.

Blessed with oil-and-gas-rich shale formations underlying Fort Berthold, the MHA government collects about $25 million in royalties a month. All in all, the tribe has collected about $1 billion in oil money since the fracking bonanza took off in 2008.

And yet life for much of the MHA Nation is mostly bleak. Poverty, health problems, and drug abuse abound. Average life expectancy hovers below 60. Meanwhile, the government's lack of transparency and its well-documented ties to oil and gas interests have left tribal members in deep suspicion.

"The yacht, of course, is the most visible thing," says Theodora Bird Bear, a 63-year-old resident of Mandaree, an impoverished town of 600 on the reservation. "But if the yacht's there, what else is there? We don't know."

Fort Berthold alone is responsible for about a third of North Dakota's oil production, around 330,000 barrels a day. If the reservation were its own state, it would be the seventh largest oil producer in the country, just behind Oklahoma.

Some have reaped the boom's benefits. Fewer than half of the tribe's members own oil-rich land and earn royalties from leases negotiated with industry. (A smaller number of these landowners actually collect sizeable amounts.)

Most member's ability to benefit from the boom basically hinges on how much their government is willing to do for them.

"For some of those that own land, the oil boom has been great," Vance Gillette, a 64-year-old lawyer from New Town, states. "The rank and file don't own land and so, of course, there's some resentment there."