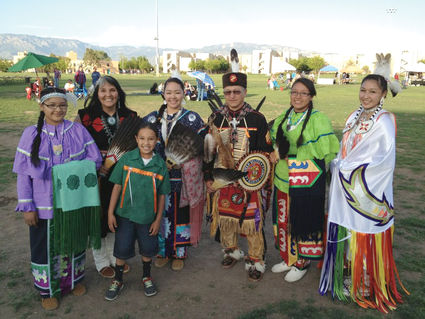 Casey and his wife Lora, Navajo, have five children. (L to R): Deezbah, Lora, Bahozhoni (front), Shandiin, Casey, Nizhoni, Alilee. Alilee and Shandiin are in university and Nizhoni plans to start this fall. It won't be too long before the two youngest will be heading off as well.

VANCOUVER, WA-Wiconi International announced the appointment of Casey Church to be the Interim Director, effective January 1, 2015. Church is a member of the Pokagon Band of Potawatomi of Michigan and his wife Lora Church, a member of the Navajo Nation.

The Churches have been active members of Wiconi where they have led several activities at the Wiconi Living Waters Family Camp. In 2014, Casey was appointed as the Camp Director.

"Casey brings many years of working alongside Richard [Twiss] and has a clear understanding of Wiconi's vision and mission," stated Wiconi Board Chairm...