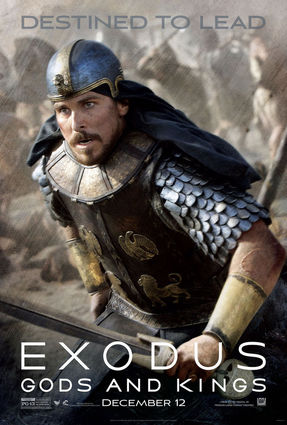 "You don't always agree with me, and I don't always agree with you, and yet here we are... still talking." The little boy who plays God (or God's messenger) in Exodus: Gods and Kings says this to Moses near the end of the movie, as Moses carves out the Ten Commandments with hammer and chisel (no finger of God here). And that line may go the furthest to express Ridley Scott's approach to God and spirituality throughout the movie. This is a film filled with profound uncertainty, which is not the same thing as doubt.

Scott dedicated this film to his late brother, Tony Scott, who passed away in 2012. Knowing this, and knowing that the Exodus story has been told before as a story about rivalry between two brothers, Moses and Rameses, I expected a much more personal film than the one I watched.

This film is far more interested in spectacle than in characterization. The rivalry between the two main characters is about as bland as it can be, because the two leads are bland; we learn next to nothing about either of them. No effort is made to portray them as distinct and unique individuals with a relationship full of history.

But when it comes to spectacle, Ridley Scott is one of the best. This film is full of breathtaking effects, and makes some of the most epic chapters of the Bible really come alive on the screen. The plagues are disgusting and overwhelming. The sight of 400,000 people walking across the desert is amazing and brought a tear to my eye. And the crossing of the Red Sea is fantastic and memorable.

Scott's methodology, however, can feel confusing and inconsistent. There are times when he seems to be trying to explain away the supernatural. Moses hits his head on a rock just before he sees the burning bush and the messenger from God; maybe he's lost his mind. But then the messenger tells him things he can't know any other way.

The plagues seem to have natural causes (if you can consider a horde of giant alligators to be "natural") but then when an Egyptian mistress tries to explain the science behind it all, Rameses just rolls his eyes... and has the concubine hanged. If he doesn't believe it, are we supposed to?

Also, Scott has chosen to present God as a small boy who regularly appears to Moses, but never to anyone else. Portraying God on screen is always problematic, and, if nothing else, this is a bold choice. A close friend of mine really enjoyed this portrayal, to him, seeing God as a child instead of authoritative figure with a beard and a booming voice was refreshing. He pointed out to me that children often speak with still, small voices, and people find them easy to ignore or not take seriously. Good points.

At the same time, I have to wonder if Scott wasn't also trying to portray God as childish. He is stubborn, petulant, and impatient. Moses objects, loudly, to the plagues, believing that God is going too far, and I couldn't help but think that they did look like a tantrum thrown by a very powerful child. (This is markedly different from the way they come across in the Bible.)

It's clear that Ridley Scott isn't at all sure what he thinks about the God of the Bible, or whether he agrees with everything he does. The film dwells, quite poignantly, on the death of the Egyptian firstborn; it's one of the few moments when Rameses seems most human. And when he asks Moses, "What kind of fanatics worship a God who kills children?" It's a live question, and one without an easy answer.

We are reminded in the film that "Israelite" means "those who wrestle with God," and Scott has chosen to put some of his own wrestling right there on the screen-right alongside the giant alligators. And so, even if I come to different conclusions about the nature of God than he does, I respect and admire his honesty. It's what keeps Exodus: Gods and Kings from being nothing more than empty spectacle.

A lot of people have complained about the whitewashing of the cast, led by Christian Bale and Joel Edgerton, and populated almost entirely by whites in speaking roles. The Hollywood system is broken and racist; it's rare to see a lead role in a multimillion dollar film like this given to a person of color, and Ridley Scott says his hands were tied in the primary casting; without Christian Bale as Moses, there's no film.

It follows then, that Rameses would have to be played by someone who looks like he could share a grandfather with Bale. The revelation that Moses and Rameses are not actually blood relatives is a major turning point in the story. But other roles could most definitely have been given to actors and actresses of color; the most notable being Moses' wife, Zapporah the Midianite, played by Spanish actress Maria Valverde Rodriguez. She is made up to look East Indian, because A) if you want an East Indian, why not cast one instead of dressing up a Spanish woman to look like one, and B) almost all biblical scholars agree that the Midianites were dark-skinned. An African-American actress would make a lot more sense, and be more historically accurate. 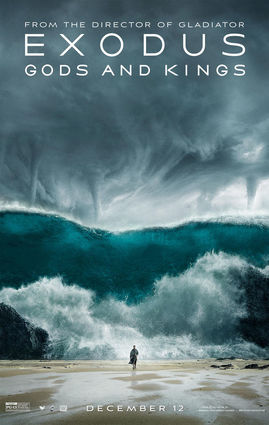 When it comes to spectacle, Ridley Scott is one of the best. This film is full of breathtaking effects, and makes some of the most epic chapters of the Bible really come alive on the screen. The plagues are disgusting and overwhelming. The sight of 400,000 people walking across the desert is amazing. And the crossing of the Red Sea is fantastic and memorable.