Wrapped in the arms of love 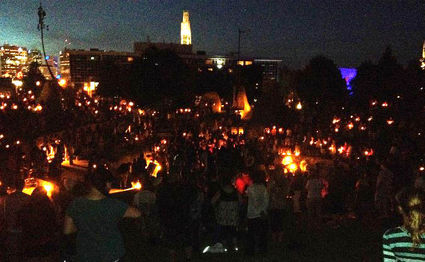 More than 1,000 people walked from the Red River to the Oodena Circle at The Forks in downtown Winnipeg on August 19. The crowd gathered for a ceremony, walk and vigil to honor both teenager Tina Fontaine and Faron Hall, the so-called homeless hero (see article on page 1) whose body was also found in the river on the same day, a few hours after Tina's.

That was the farewell spoken by Tina Fontaine's mother, who shares the name of her 15-year-old daughter whose body was found in the Red River on Sunday, August 17.

Fontaine hadn't seen her daughter in two years. She choked on her words, letting her tears flow freely as she addressed more than 1,000 people at the Oodena Circle at The Forks on Tuesday evening, August 19.

She described having detectives come to her door to tell her Tina was dead. The only way to identify the teen was by a tattoo on her back, which she got to remember her father, who was slain two year...