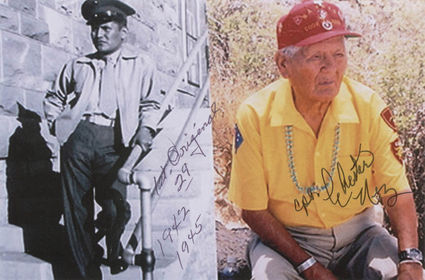 Chester Nez was the last original Navajo Code-Talker. He passed away peacefully on June 3rd at the age of 93.

The Navajo Code Talkers are credited to have helped change the face of World War II, using their native Navajo language as a basis of communication between American forces. The code developed-a combination of Navajo and secret words-was never broken by the Japanese forces.

As I wrote in a previous Assist News Article, "For those not familiar with the Navajo Code Talkers, a brief history is in store.

"At the outset of World War II, Philip proposed the idea of the U.S. using the Navajo language as code. As a trial, the Marines recruited four Navajos living in the Los Angeles area. The program was so successful, the acting General, Clayton Vogel, put the plan into action.

"On May 4, 1942, twenty-nine Navajo recruits boarded a bus at Ft. Defiance, Arizona, and were sent to San Diego for active duty, beginning their seven weeks of recruit training.

"The rest, if you will, is history.

"The end result is that the Navajo Code Talkers helped win the war. The Japanese couldn't break the code, so communication was unbroken, giving the US the upper hand in the Pacific.

"Since that time, movies have been made (Windtalkers with Nicholas Cage and Adam Beach), documentaries created (History Channel) and many books written by the surviving members."

On a personal level, I was honored to have met Mr. Nez on two occasions: The Gathering of the Nations Tribal Event and at a book signing. He was a generous man, smiling and greeting all that stopped by to give their respects.

In a world in need of hero's-men and women fighting for something they believe in-Nez will be a missing voice. Yet through his book, example, and life, the world can learn about the heroic nature of the Navajo Code Talkers, and a man named Chester Nez.