Every marriage and family are different but....

We Found What Works For Us 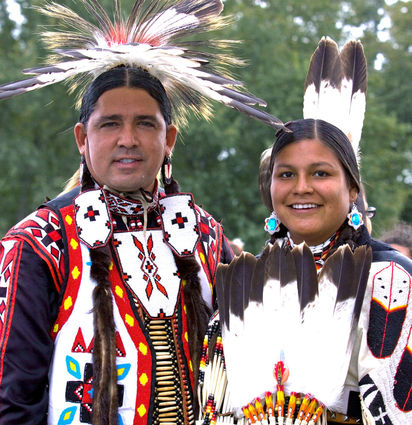 While ministering on First Nations reserves in Canada, Charles Robinson saw Siouxsan for the first time at the Indian Friendship Centre in Vancouver. At that moment, God told him that he would spend the rest of his life with her. Siouxsan, on the other hand, had six specifics she was looking for in a husband. Incredibly, Charles met all those requirements. They have been married for ten happy years of ministering to others.

We celebrated our ten-year anniversary much like we've celebrated the previous nine, traveling to reservations and ministering to Native people who are dealing with the same challenges we have been healed from. We travel with our seven children onto reservations in South Dakota, Arizona, Montana, Idaho and Canada bringing Hope to our Native people. For ten years we have been celebrating the gift of marriage and sharing our story with others . . . bringing Hope to those who desire the same.

Siouxsan (Lakota/Blackfoot) was born on the Rosebud Reservation and raised on the Blood Reserve (Kainai) in Alberta, Canada. She survived a life of abuse, addictions and attempted suicide.

As a young, single mother she heard of Jesus for the first time. "If what they say about Jesus is true, then I want Him in my life," she thought.

In a time of desperation, she called out to God and asked Jesus to come into her life. "I felt this overwhelming chill run through my body. It started at my feet and went to my head, then back down to my feet. I then had this amazing feeling of peace, like I had never known before." Her new life, as a follower of Jesus, did not come without challenges and rejections. She was initially told that she would have to give up a lifelong passion of hers: powwow dancing. After studying the Bible and realizing the many examples of celebrations and dancing (which is all a powwow really is anyway), along with much prayer, she received a peace about continuing to dance. With a new outlook on life, she set out to complete her high school degree and pursue college.

I (Charles) grew up in Dallas/Fort Worth, Texas and, while identifying with my Native heritage, I did not grow up with my Choctaw culture. I wanted so much to be like the Native people I read about in books (Sitting Bull, Crazy Horse, Chief Joseph, etc.), not like the ones I saw when visiting a family in Oklahoma battling addictions and the negative effects of boarding/residential schools. However, it was during my high school years through the ministry of Young Life I was shown that being a Christian was not a religious set of rules, it is a relationship with Jesus. A Young Life leader named Vance Patterson exemplified that relationship and it was during a YL camp in Colorado that I prayed to ask Jesus to come into my life. I remember having such a great feeling of relief. It was as if I had finally climbed the summit of Mt. Kilimanjaro and I didn't even know I had been climbing a mountain.

After high school, I moved to Europe and played professional basketball, then returned to attend the University of Oklahoma. I pursued many different careers, including being a wrangler on a dude ranch and working in the country music industry for many years. It was during this time that I began to spend more time on reservations.

It was then that I realized that only three to five percent of the Native population profess to be Christians. Learning these sad statistics, I started The Red Road. It is a non-profit charitable organization that serves as a launching pad to share the love of Jesus with Native people in a culturally relevant, yet biblically sound manner. It is a very relational approach, striving to work with churches, ministries and individuals who have a year-round presence in Native communities.

While ministering on First Nations communities in Canada, I saw Siouxsan at the Indian Friendship Centre in Vancouver, British Columbia. The moment I saw her, God told me in my spirit that I would spend the rest of my life with her.

I was a bit conflicted, though. I believed that for a marriage to have the greatest chance of success, the couple would need to be in agreement on the most important aspect of their lives. To me, that was being a Christian. I knew statistically, that the chances of her being a follower of Jesus were HIGHLY unlikely. Little did I know that not only was Siouxsan pursuing Jesus, she was aggressively seeking outreach opportunities among the Aboriginal youth of Vancouver!

Siouxsan was content with her goals of college and law school. Even though she desired to be married, she was happy pursuing life with her six-year-old daughter. It was during this time of "not looking for a husband" that she was told that "God likes specifics. So if she really wants something, she should pray to God with specifics."

Siouxsan decided to share her desire for a husband with, along with her list of specifics: "IF You (God) are going to bring me a spouse, I pray that he 1) would be Native, 2) would be a Christian, 3) he would be proud to be Native AND Christian, 4) make him from Oklahoma, 5) give him an accent (she likes my southern drawl), 6) have him ask my mother for her blessing."

One by one, each of these prayer requests were fulfilled during my three-day visit in Vancouver. In fact, Siouxsan even had a dream the first night she met me that "God sent Charles to Vancouver for you." Ironically, she initially rejected me as a distraction to God's plan for her life. But on the fourth day of our having met, we openly discussed what God had been telling each of us. Four months later, we were married!

I remember hearing that when Helen Keller, was told of God, she replied, "I always knew Him, I just never knew His name." That was exactly how I felt when I met Siouxsan, I always knew her, but NOW I know her name!

We've been married for ten years and have seven children.God has given us some of our children biologically, others He gave through the miracle of adoption. 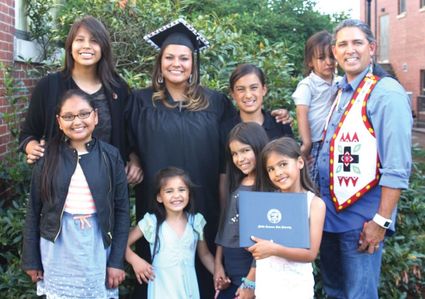 The Robinsons have seven children, some biological, and others through the miracle of adoption. In addition to mothering her children, Siouxsan has found time to study and graduate with a Bachelor of Science in Psychology and a minor in Political Science and Criminal Justice from Middle Tennessee State University!

Along with raising seven children, Siouxsan has found time to graduate from Middle Tennessee State University with a Bachelor of Science in Psychology, with a minor in Political Science and Criminal Justice!

Our entire family are Powwow dancers. Along with the ministry, I have written one book, The Silent Voice of Creation, and we speak on Native American issues in colleges, churches, and schools. Siouxsan also shares her story of abuse, attempted suicide, and how God rescued her through it all.

While there is no magic formula for a successful marriage, Siouxsan and I have realized what works for us: 1) Place God first in our lives (even above marriage, children, and Native culture),

2) Pray for each other AND with each other daily, 3) Be specific with our prayers to God, 4) Be intentional about showing love to each other and our children every day, and 5) Surround ourselves with people who are like-hearted and are bold enough to speak the truth to us.

If you are interested in learning more about Charles and Siouxsan and their ministry, please visit their website: http://www.TheRedRoad.org.