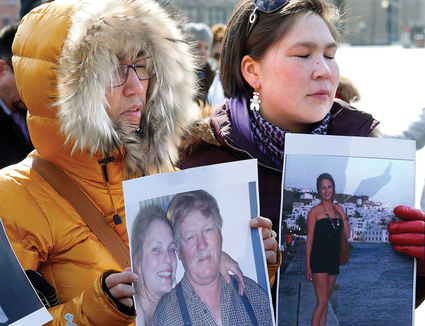 At a vigil on Parliament Hill on March 5, people gathered to honor the memory of Loretta Saunders, the latest victim, and to call for a public inquiry. Vigils for missing and murdered Aboriginal women have so far not produced an inquiry.

OTTAWA, ON-Another vigil was held on March 5 on Parliament Hill for missing and murdered women. This time for a young Inuit woman.

There were hopes that this would prompt the Canadian government to conduct a public inquiry into the missing and murdered women in Canada.

This vigil was made all the more urgent by the loss of Loretta Saunders, a young Inuit woman found slain on the side of a New Brunswick highway the weekend before. But it was not to be.

On Friday, March 7, the House of Commons presented its report on Canada's missing women but did not recommend an inquiry.

The Special Committee on Violence Against Indigenous Women tabled their long-awaited report offering 16 recommendations on how to deal with this crisis. The report, titled "Invisible Women: A Call To Action," fell short of demands by Aboriginal groups and opposition parties who have been relentless in their call for a national inquiry.

The Assembly of First Nations National Chief Shawn Atleo said the report was "disappointing" to the victims and families of missing and murdered women and girls.

"I have spoken to the leadership of the Native Women's Association of Canada (NWAC), the Métis National Council and the Inuit Tapiriit Kanatami and we will be meeting to discuss next steps and set out a plan to get action on this critical matter," Shawn Atleo stated in a written statement.

"This report fails to show the needed commitment and resources to adequately address this ongoing tragedy-a tragedy that is a reflection on Canada as a whole," Michèle Audette, NWAC president, told CBC News.

Cheryl Maloney, president of the Nova Scotia Native Women's Association, says the death of Loretta Saunders has drawn widespread concern among both Aboriginal and non-native Canadians who feel the issue deserves greater attention.

"I think that Loretta's case broke through a lot of stereotypes of what missing and murdered aboriginal women look like in this country," Maloney told the Canadian Press.

According to Halifax police, the Saint Mary's University student was killed February 13, the day she was last seen at a Halifax apartment she once shared with the two people charged with first-degree murder in her death.

Saunders's body was found two weeks later on a median off the Trans-Canada Highway west of Moncton, New Brunswick.

Maloney said her death is a reminder that Native women are dying violently for a variety of reasons that need deeper examination. Saunders' college thesis was on Canada's missing and murdered women.

Between 2000 and 2008, 10 per cent of all female homicide victims in Canada were Aboriginal women and girls, despite them representing only three per cent of the country's female population, according to the Native Women's Association of Canada.