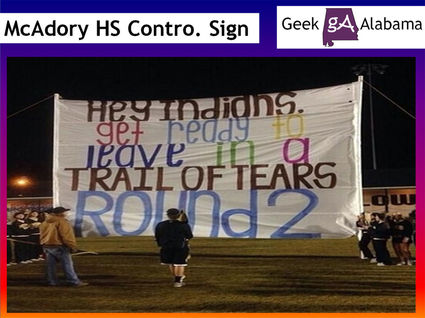 Students from an Alabama high school held up a banner offensive to Native Americans for which their principal apologized.

McCALLA, AL-Students from an Alabama high school held up an offensive banner which read "Hey, Indians, get ready to leave in a Trail of Tears Round 2". A second banner was held up at a school in Tennessee which stated "Trail of Tears".

Tod Humphries, the principal at McAdory High School in McCalla, Alabama, said he takes "full responsibility" for the banner.

The banner was directed at the school's opponents, the Pinson Valley High Indians. On the school's website, the principal apologized noting that Native Americans suffered "horrific atrocities" on the Trail of Tears.