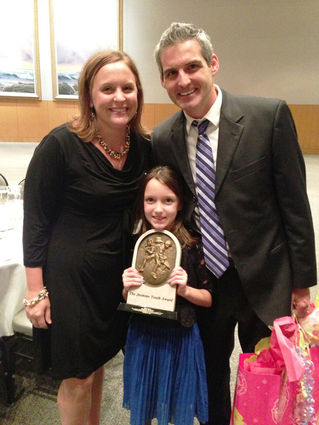 Eight-year-old Paige Sykes with her dad Brent and step mom Amanda, on the evening she was honored with the first-ever Youth Philanthropy Award from the Jasmine Moran Children's Museum, Seminole, OK.

SEMINOLE, OK-The idea was simple. Brent Sykes wanted to give his daughter a tangible way to remember her mother, Traci, who died in a 2007 car crash.

Mr. Sykes, a Chickasaw citizen, decided to establish the Traci R. Sykes Foundation. Today, his daughter Paige, an energetic eight-year-old, is bringing joy, peace, happiness and educational opportunities to others through foundation gifts in her mother's name.

"When she was about five, she began talking about the meaning of the foundation," Mr. Sykes said. "We would discuss where she would like to donate and ultimately I would let her decide...