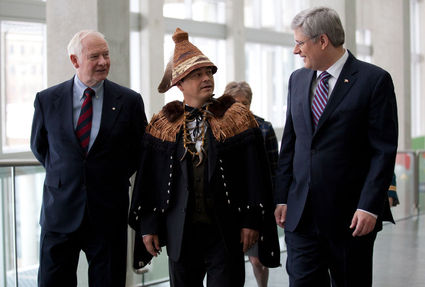 "Seizing Canada's moment must mean action for First Nations," said National Chief Atleo. "It must include working with First Nations people and governments to realize the potential of our citizens, our governments and our nations. This is how we will ensure security and prosperity for all Canadians.

The Speech from the Throne includes a number of references to First Nations, in particular in priority areas including education, Treaty implementation and comprehensive claims. "We have heard promises for too long, now must be the era of action. First Nations are going to move forward and take action based on our rights, title and Treaties because we have the solutions and we call on Canada to move with us and honor its words of partnership."

The government set out a number of initiatives that involve or affect First Nations. The Speech opened noting the 250th anniversary of the Royal Proclamation and included specific reference to working with First Nations to develop stronger, more effective, and more accountable on-reserve education systems; continuing dialogue on the treaty relationship and comprehensive claims; renewing efforts to address the issue of missing and murdered Aboriginal women; ensuring Aboriginal people have access to job-training and can benefit from "natural wealth."

On the commitment in the Speech to "develop stronger, more effective and more accountable on-reserve education systems," AFN Nova Scotia-Newfoundland Regional Chief Morley Googoo, who holds the Education portfolio, stated: "We cannot make our children wait, we cannot lose another generation. First Nations have put forward a very clear vision of what is needed: an approach that supports First Nations control of First Nations education, that values our languages and cultures, supported by fair sustainable funding and is accountable to our parents and people first. First Nations are ready to move on this approach and Canada must move with us now for the good of the entire country."

The Throne Speech stated: "Our Government will continue our dialogue on the treaty relationship and comprehensive land claims. AFN Saskatchewan Regional Chief Perry Bellegarde, who holds the portfolio for Treaty Implementation, said: "We need to see concrete action to move toward the full implementation of the terms of Treaties according to their original spirit and intent on a nation-to-nation, treaty-by-treaty basis. We look forward to the Government of Canada moving forward on Treaty implementation in keeping with the observation of the United Nations Special Rapporteur on the Rights of Indigenous Peoples, James Anaya, that today's adversarial approaches on behalf of Canada need to be replaced with reconciliation. And in the spirit of reconciliation and meaningful and mature dialogue we must fully explore establishing new structures such as a Crown-First Nations Relations Department and mechanisms such as a National Treaty Commissioner appointed by Parliament and Indigenous peoples with the appropriate mandate and authority for Treaty Implementation."

AFN BC Regional Chief Jody Wilson-Raybould, co-chair of the federal Senior Oversight Committee looking at the Comprehensive Claims Policy, said: "Ensuring that Canada's Aboriginal peoples 'have every opportunity to benefit' from resource development means that Canada has to get serious about addressing Treaty implementation and the outstanding land question where there are no Treaties and reconcile with our Nations. Canadians deserve this-First Nations are demanding it. Settlement of the outstanding land question and reform of Canada's existing policies, such as the Comprehensive Land Claims policy referenced in this Throne Speech, are inextricably linked to responsible resource development. You cannot have 'responsible resource development' in the absence of a commitment to the development of a clear framework for resolving the outstanding land question based on the principles of recognition and reconciliation. We will continue to look for the political will and strong commitment by Canada to this important work that is necessary to build a stronger Canada where Indigenous peoples are full partners."

The Throne Speech commits the government to "renew its efforts to address the issue of murdered and missing Aboriginal women." AFN Alberta Regional Chief Cameron Alexis, who holds the portfolio on Justice, stated: "...the UN Special Rapporteur focused attention on the safety and security crisis faced by First Nations, seen most starkly where women are missing or murdered. This is an issue that First Nations have been raising for years. Canada needs to hear these voices and give priority to the investments and actions needed now, including appropriately funded and sustainable policing services, support for community-based and led justice approaches, and a National Public Commission of Inquiry into violence against Indigenous women and girls."

National Chief Atleo noted the words of the UN Special Rapporteur on the Rights of Indigenous Peoples, who concluded his visit to Canada yesterday by highlighting long standing issues that need to be resolved, stating: "'Concerted measures, based on mutual understanding and real partnership with aboriginal peoples, through their own representative institutions, are vital to the long-term resolution of these issues.'"

"Working together, we can and must get this right, right now," stated Atleo. "So our children do not have to wait any longer to enjoy a quality of life and opportunities available to so many others. We are calling for real commitment to positive action and change, driven by First Nations based on our plans and priorities."