No longer stuck in a hopeless situation 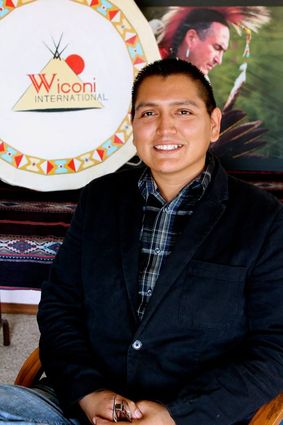 The story of my life is nothing special or unique, but a typical Rez life situation. Once I gave my life to the Lord, my situation did not get better but I knew I wasn't alone now. Christ became my hope, and therefore my salvation.

As I walked in, I saw my mother laying on the couch, bloody from my dad beating her, shaking in fear, unsure of what to do. Fear shot down my spine and I knew once again I was going to be hit with the realities of life.

Ya'a'teeh, my name is JR Lilly and I am a citizen of the Navajo Nation. I belong to the Red Running into Water Clan and I am born for the Cliff Dwelling People Clan. I was born and raised on the reservation as the second oldest of six children (four brothers and one sister).

The story of my life is nothing special or unique, but a typical Rez life situation. When I was a baby, we lived in a bedroom of my father's mother's house in Sawmill, Arizona. Like most families on the Rez, we learned to live in Third World poverty conditions like no running water and having to heat everything with a wood-burning stove. Living conditions were never ideal growing up.

My dad had many problems, including alcohol, all sorts of drug addictions, depression, and other issues. My mother was a strong woman but became less and less alive from the abuse of my father.

We would eventually move into our own house in the ghetto, known for gang violence and drugs. It was here that my dad's anger and abuse became a regular thing.

I remember once in Third Grade, coming home and seeing blood on the doorstep. As I walked in, I saw my mother laying on the couch, bloody from my dad beating her, shaking in fear, unsure of what to do. Fear shot down my spine and I knew once again I was going to be hit with the realities of life.

As I was walking into the house, my dad in his rage ran up to me and grabbed me by the arm, yelling profanities and hateful things. He took me to the back room and threw me on the bed and began to tell me how "if I ever called the police on him that he would kill me". These words still echo in my head with many other quotes of my father like "How stupid are you? Can't you do anything right? You will never make it. You're useless."

I still remember the pain of when my dad would slam the car door on my hand and not look back as I screamed or when he would hit us across the face just for looking at him wrong.

This was my life as a kid. My brothers and me knew that when things got rough it was our job to find my younger siblings and sneak out. We always had to be ready; my brother had a baseball bat by his bed all the time and always had an escape plan ready. There are many other stories I could share but I hope you get the picture; life was not easy growing up.

As a young person, I wished I had never been born, and eventually gave up on hope, thinking that there was nothing that could happen or nothing that I could do that would make life any easier or better. Life was hard and it always will be.

One day when I was 11 years old, my family went to visit my grandmother for the weekend. During this visit we attended church with her, which was not far off from what we did back home. I expected this church to be different. They told us of how Jesus really did love us and that if we wanted to, we could have a personal relationship with Him. So as a family, we went to the altar and gave our hearts to the Lord. But I did not fully understand until a few months later.

So as new converts to the faith, my dad did clean up his act for a bit. But he still had all the problems of anger and unexpected emotions. He would still lash out at us and cause me to hate the world around me.

Then one evening I was just tired of it all-all the pain I had to endure, all the failures of others, all the weight on my shoulders, and the miserable fact that there was no way out of this life. So I decided that I was giving up on life, that since it wasn't getting any better what was the point on continuing.

So I planned to end my life. And just as I was about to carry it out I fell to my knees and wept. As one last attempt for hope I cried out to this God character, and said "I'm not totally sure who You are and what You do, but the preacher man said You can make my life better. I don't want my life anymore so why don't you have it? Here it is, take it." The next moment can only be described as if my twisted back was made straight and I was finally able to breathe. A huge weight was just lifted and I felt something or Someone just holding me.

This was a new feeling for me; it was odd and a little strange. Looking back on it now, this might be the first time I felt unconditional love.

Once I gave my life to the Lord, my situation did not get better but I knew I wasn't alone now. Christ became my hope, and therefore my salvation. So from this point on I did as much as I could to find out more about this Jesus dude which led me to reading the Bible, going to a church, and spending much time in prayer. The more I learn, the more I feel in love with Him. Learning that He will never leave me, and that He loves me no matter what, were two very revolutionary ideas that were new in my life.

Over the years of following the Lord, He has lead me through many difficult times and provided a shield for me in the middle of hard times. I worked my way to teaching children's church, speaking at youth conferences, working with my pastors on the reservation. My love for the Lord and the Scriptures only grew over time. These spiritual developments led me to work hard in all areas of my life, school, sports, and social life. This resulted in being the team captain in wrestling and track, honor roll, leadership awards and on my way to college.

Despite all my hard work and success, I was still stuck in the broken world around me. In fact, I remember the harshest word my mother ever spoke to me. She told me on graduation day that she "had never been more disappointed in anyone of her boys than she was of me."

Looking back, I know it was her speaking from her brokenness, but it still hurt and made it a struggle for me to keep moving forward. It was not only my brokenness that was an obstacle but also the brokenness of others around me that I had to overcome.

After working hard in high school, my escape plan was finally underway. I was leaving for college and about to start working to set myself up for success.

It was a wonderful experience for me as I worked through my business degree at Lee University in Cleveland, Tennessee. Much could be said about these years but the highlights are traveling the world (Peru, Egypt, Israel, Ecuador), starting up a Feeding Ministry, working with Students of Color, and working with Native Ministry to tribes all over the U.S.

In the end, I was one of the top students in my class, got awards several times from the State of Tennessee and school for my service, and I was in charge of the International Student Office. Needless to say the Lord brought me to a place where I found favor in the eyes of man.

Just when I thought I had escaped the harsh realities of Rez life, I get a phone call in the middle of the night. It was my mother and she sounded scared and nervous about something as she began to explain the terrible things that happened that evening. She was calling from a battered women's shelter.

Turns out, that evening my father once again came home drunk and his rage got the best of him. In his anger, he let out a very real threat of how he was going to kill himself, but before he did he would kill my mother and siblings. This news hit me like a ton of bricks and the worst part was that since I was in college there was nothing that I could do.

In tears, my mother proceeded to tell me that she was able to calm him down and told him that she was going to do some laundry down the street. So she took the kids and a basket of laundry and walked to the gas station where she called a friend who took her to the shelter. My mother and young siblings were at least safe, but now are in a shelter running for their lives with nothing but a basket of dirty laundry.

At the height of my college experience and ready to move on to better things, my life comes crashing down as if everything I had worked towards at that point was now all meaningless.

Harsh realities of my past life caught up with me. Stress and worry about what do I do now. Or a better question, "What can I do now?" All I had the strength to do was to once again fall on my knees like I did so many years ago and cry out to God. And the Lord heard my prayers.

Immediately my friends began to gather around and help raise support to bring my family to Cleveland, TN, where I was attending college. The community that I had only belonged to for a few years came together and helped me bring my family to safety.

We were able to bring them to Tennessee, set them up with jobs and an apartment, get them into counseling, and enroll in schools.

It was a time where the Lord really showed up in a big way for all of us. For me, it was a fulfillment of a promise the Lord had given to me so long ago, "And we know all things work together for good to them that love God, to them who are the called according to His purpose" (Romans 8:28).

Currently my family is still not in an ideal situation and we do still wrestle with many things. But we are no longer stuck in a hopeless situation. We are in a process that is guided by the Lord.

And as I reflect on where we have come from, I know that my story is not special or unique. It is the story of many Native families who are born into harsh realities of Rez life that comes from generations of brokenness.

There is a lot of work for everyone to do, but I am glad now that I am able to assist in the process to help create a preferred future for Native Peoples. 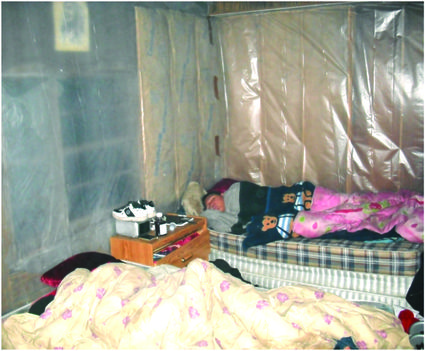 When I was a baby, we lived in a bedroom of my father's mother's house.