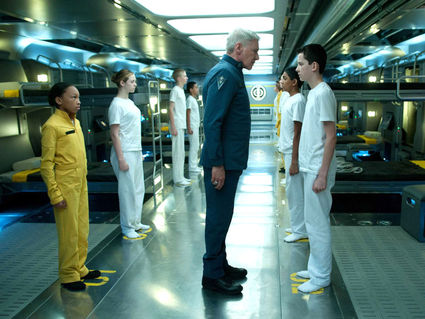 Ender was the third child when he was born, which is illegal as only two children are allowed per family. Here Harrison Ford talks to Ender (right front) played by Asa Butterfield.

Ender's Game is a movie about war and children. Set in the distant future, humanity has barely survived an attack by a vastly superior alien enemy, almost entirely due to luck and good timing. The aliens look and act like giant bugs, and their faces fill the nightmares of Earth's children every night.  And maybe not just the children. The thought of a second bug invasion scares the pants off of Earth's leaders so they are doing everything imaginable to make sure that doesn't happen.

Their primary strategy is to recruit and train children to fight their battles for them. You can't teach an...