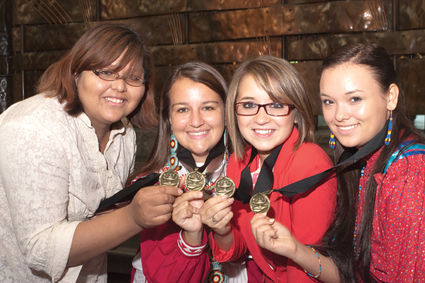 WASHINGTON, DC—The winners of the Holland & Knight Charitable Foundation’s 2013 Young Native Writers Essay contest have been announced. They include five Native Americans from Montana, Texas, California and North Carolina. Their tribal affiliations are Blackfeet Nation, Choctaw Nation, the Round Valley Indian Tribe, Chickasaw Nation and the Eastern Band of Cherokee Indians. The contest is open to high school students from all tribal communities throughout the U.S.

This contest was created in 2006 in response to a tragedy on the reservation for the Red Lake Band of Chippewa Indians. It focuses on the richness of Native American life and history, and challenges Native American youth to speak out on issues important to their tribal communities.

• Shanice Britton of the Round Valley Indian Tribe, Covelo, CA;

• Morgan Gray of the Chickasaw Nation, San Antonio, TX; and

• Constance Owl of the Eastern Band of the Cherokee Indians, Murphy, NC.

The Holland & Knight Charitable Foundation partners with the Smithsonian Institution’s National Museum of the American Indian to plan and execute activities during Scholar Week. All finalists are invited to participate in an all-expenses-paid “Scholar Week” in Washington, D.C, which began on July 15, 2013. Their activities included an honor ceremony at the National Museum of the American Indian; a tour of the NMAI Cultural Resources Center where tribal objects were viewed and studied; educational symposiums; and a tour of the U.S. Capitol.

The winners also received a $2,500 scholarship to be paid to the college or university of their choice. For more information about the contest, see http://www.nativewriters.hklaw.com.