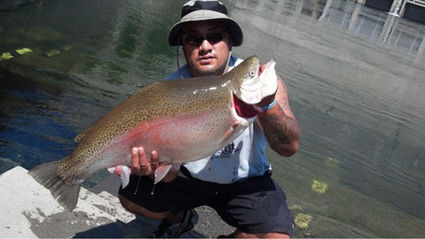 Tui Moliga with his monster trout. This trout weighed 28 pounds, 9 ounces. That’s heavier than a prior record set in the state.

Tui Moliga, a member of the Nez Perce Tribe of Idaho, caught a rainbow trout that appears to break the record books.

Moliga’s trout weighed 28 pounds, 9 ounces. That’s heavier than a prior record set in the state.

“Right away I knew it was a good one,” Moliga, who works for his tribe’s hatchery, told The Lewiston Tribune.

Genetic tests will confirm whether the fish is a “pure” rainbow trout. But since Moliga is a tribal member and the rules for fishing in Idaho are different, his catch will not be officially registered by the state.