Relegating Native Americans to the past The Lone Ranger 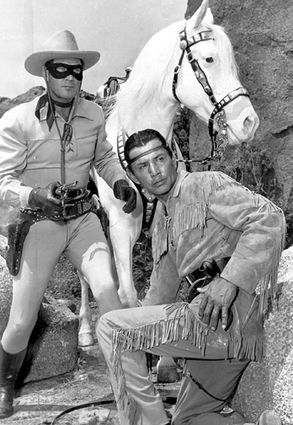 If you thought the new Lone Ranger movie would be a sequel to the original TV series or movie, you’re in for a shock. Our reviewer writes: “This is a schizophrenic film. The experience of watching it is similar to what I imagine a visit to a mental hospital would be like. It veers from ridiculous to campy, from fast-paced and breathless to terribly serious to suddenly, perhaps unintentionally, funny again.”

It seems like all Native America wanted to talk about this summer was “The Lone Ranger” and whether it honored or offended Native Americans. I’ve read articles from Native people on both sides, so I’ll let my words be few on this topic.

Frankly, I expected it to be worse. It makes some honest, if clumsy and possibly misguided, attempts to honor Native peoples. Its greatest sin is that it relegates Native Americans to the past. Tonto appears to be the last living Indian, and he’s hardly more than a peanut-guzzling wax figure in a Wild West museum. The filmmakers might be surprise...