Sculptures in works for 'Dakota 38' warriors 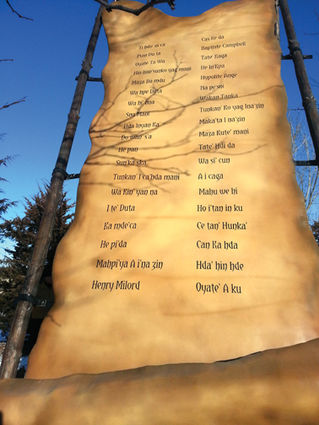 The names of all 38 warriors hanged on December 26, 1862, are written on a 12-foot-high monument that was recently dedicated in Mankato’s “Reconciliation Park,” a small area of markers and sculptures devoted to remembering America’s largest mass execution, which is believed to have taken place somewhere in the immediate vicinity.

MANKATO, MN—The challenge is on to match names and photos with each one of the Dakota 38, plus the two who were hanged later.

When Larry Redwing, enrolled Santee, was a little boy, he lay with his head in his grandmother’s lap. While she ran her fingers through his hair, she told Larry about her own grandmother, who was made to watch the hanging of her husband while the townspeople cheered and yelled.

The starving Santee had finally revolted against their oppressors and attacked the city and the Dakota 38 were sentenced to death by President Abraham Lincoln. “They say Lincoln was a g...