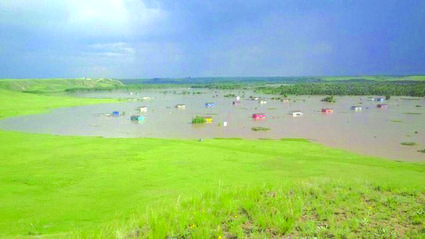 The First Nations of Alberta are in crisis mode, especially The Siksika Nation, part of which is pictured here, is badly affected. One thousand residents were evacuated. The reserve lies alongside the Bow River, east of Calgary.

CALGARY, AB—In Southern Alberta the recent flooding continues to wreak havoc. On June 24, 2013, it was announced that the Alberta Government approved funding of up to $1 billion to start rebuilding community dwellings destroyed by water damage and provide much needed support centers for residents who have been displaced from their homes. Meanwhile a leading scientist issued concerns that the landscape of Southern Alberta may well have been changed indefinitely.

Over 1,300 First Nation people are reported homeless, their homes submerged in muddy water. Roads are deemed useless due to wate...