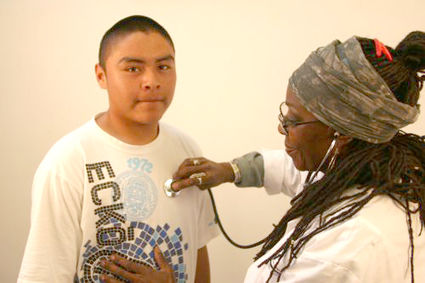 Native child being examined by Native Health doctor. The Improving Patient Care program, a team based approach to care, has increased the number of sites to a total of 127 (adding 89).

Specifically, Simpson, the chairman of the House Interior Appropriations Subcommittee on Interior, Environment, and Related Agencies, was asking if recent increased funding for the Indian Health Service has made a difference.

Dr. Yvette Roubideaux, director of the IHS, went through the numbers at an oversight hearing. IHS appropriations have increased 29 percent since 2008 which, she said, is “making a substantial difference in the quantity and quality of healthcare we were able to provide to American Indians and Alaska Natives.”

For example: Contract Health Service dollars, money spent to purchase medical services outside of the Indian health system, has been increased by 46 percent since 2008. “Four years ago, most programs were funding only Medical Priority 1, or ‘life or limb’ referrals. Now, Dr. Roubideaux reported, “the increased CHS funding means that almost half (29 out of 66) of Federal CHS programs are now funding referrals beyond Medical Priority 1.”

That means that there is now money, at least some money, for preventative services such as mammograms and colonoscopies. “The increased CHS money also means that the IHS Catastrophic Health Emergency Fund, which used to run out of funding for high cost cases in June, now is able to fund cases through August,” Dr. Roubideaux said.

Simpson said: “You can get sick now up to August?” To which Dr. Roubideaux replied, that the phrase, “Don’t get sick after June,” has been incredibly effective describing the problem of what it means for a health care delivery system to run out of money.

Clearly more money in the contract health care (soon to be labeled in the next budget as “purchased and preferred care”) program is making a difference and most likely saving lives. But what about in other program areas? There the data is convincing as well. The Improving Patient Care program, a team based approach to care, has increased the number of sites to a total of 127 (adding 89). This has resulted in both quantity (empanelling 261,180 active patients in a primary care team up from 85,079) and quality (IPC sites show patient satisfaction increasing from 55 percent in April 2011 to 72 percent currently.)

IHS has provided more women mammograms, up from the low to mid-40 percent range to more than 50 percent.

Indeed, Rep. Tom Cole, R-Oklahoma, asked what else Congress could be doing to make the IHS even more efficient, beyond appropriations. He asked about removing bureaucratic obstacles or better definitions in the law. “We know we need to do more,” Cole said.

Navajo Nation Vice President Rex Lee Jim, speaking for the National Indian Health Board, agreed there have been recent improvements that followed the funding resulting in “small, but real gains.”

But what now? The federal budget sequester will reduce the ability of the agency to provide patient care, a cut of $220 million, meaning 3,000 fewer inpatient admissions and 804,000 fewer outpatient visits.

“Any budget cuts, in any form, will have harmful effects on the health care delivery to American Indians and Alaska Natives and its true cost will be measurable in lives as well as dollars,” Jim testified. “This must change. If this Congress cannot avoid sequestration through alternative methods of deficit reduction, the National Indian Health Board implores this Congress to make IHS exempt from this process.”

Nearly everyone thought that the Budget Control Act would have limited the impact of the sequester on the IHS (as it did many medical-related spending). But one of the Congressional authors forgot to include specific language—as has been the case in the past—protecting IHS (as well as another larger agency, the Health Resources and Services Administration) from the across-the-board cuts.

Simpson was blunt. “Blame me as much as anybody,” he said. “I should have caught that.”

If Simpson’s subcommittee had all the keys to Congress this problem would be solved going forward in a process with Republicans and Democrats working together. It’s exactly how Congress is supposed to work.

But let’s be clear about this: The budget challenge ahead for the IHS with the sequester is going to be rough. Next year’s budget outlook will remain difficult. But there is also a promise: The Affordable Care Act beginning in 2014 opens up new revenue streams that could substantially increase funding. (More about that in future posts.)

What’s significant about this hearing is the narrative itself, the story that was told. For so long the story about the Indian Health Service has been one of failure. But this is a story about success, about how a government agency can execute a policy, and when given more resources, it can improve the delivery of health care.

Mark Trahant is a writer, speaker and Twitter poet. He lives in Fort Hall, Idaho, and is a member of The Shoshone-Bannock Tribes. 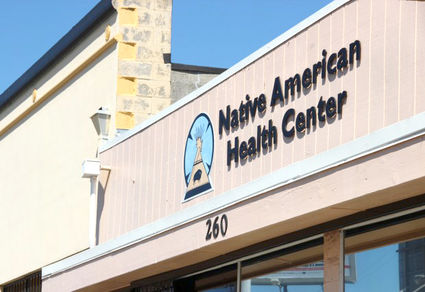 The Native American Health Center in Richmond provides the Contra Costa County Native American population with mental health and wellness services. The center is looking to expand its Richmond services to include primary and dental care near the city’s BART station.