42: The kind of movie Jackie Robinson would want 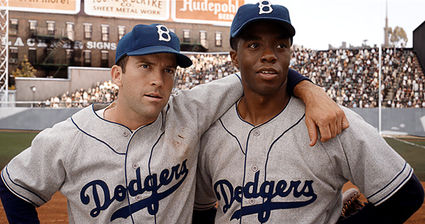 Veteran Dodger shortstop Pee Wee Reese (Lucas Black), who once famously offered to trade jerseys with Jackie Robinson (Chadwick Boseman), wearing the now-famous 42 himself, “so that people won’t be able to tell us apart,” is one of the film’s most beloved stories. It makes a great scene in the movie.

As anybody who knows anything already knows, 42 is the answer to the question of Life, the Universe and Everything. It also happens to be the number Jackie Robinson, the first African American to play Major League baseball, wore on his Brooklyn Dodgers uniform. Coincidence? I think not.

I imagine everyone knows a little bit about Jackie Robinson, who broke the color barrier in Major League Baseball in 1947. His number is the only one retired by every team in baseball, and on the day “42” was released, every player in baseball wore that number on their uniform.