The destruction of Wounded Knee by AIM in 1973 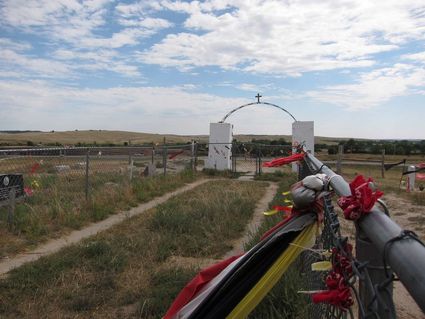 It has been 122 years since the massacre at Wounded Knee. I am still puzzled as to why the government of the Oglala Sioux Tribe would celebrate an illegal occupation that damaged the lives of so many of their own and not celebrate and honor the victims of the Wounded Knee Massacre of 1890 who are buried in this cemetery. Now those were the real heroes of Wounded Knee and not the cowards who came into the village in the middle of the night to terrorize the elderly Gildersleeves and the residents of the village by pushing them from their homes with guns at their heads.

WOUNDED KNEE, SD—Just recently, flyers were distributed across the Pine Ridge Reservation asking the residents to honor the “Liberation of Wounded Knee in February of 1973.” Those who would celebrate and hand out flyers have a delusional recollection of the past.

Wounded Knee was a small village on the Pine Ridge Reservation. There were homes where approximately 35 families dwelled and there was a so-called Trading Post which was the only grocery store for miles to serve the residents of Wounded Knee and the nearby village of Manderson. Wounded Knee was also the historical site of th...