Would Jesus Eat Frybread? Reclamation and Other Highlights 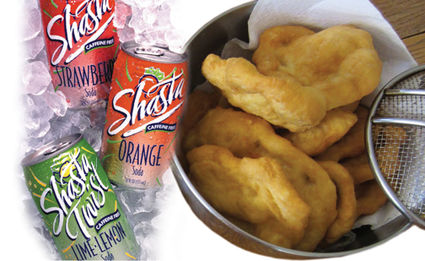 We broke frybread and Shasta together—my first communion since moving to the rez. Before we ate and drank, we thanked God in our own languages.

Frybread and grape Shasta soda—my first communion since moving to the rez. It had been a while. I shared this meal with a group of new friends—Native American Christians from Alaska, Florida, Hawai’i, Minnesota, South Dakota, Montana, and here in the Navajo nation, to name a few places. And there were a few bilagáanas, and those like me who are neither. We broke frybread together, youth and elders, each handing the elements to our neighbors. Our solemnity was punctuated only by the irreverence of pop tabs. Before we ate and drank, we thanked God in our own languages.

I knew that I would learn and be renewed. And certainly, I learned more about Native identity and ministry, contextualizing the Gospel, God’s character, and the Word than seemingly possible to pack into a weekend. But I did not expect WJEF (Would Jesus Eat Frybread?), a conference about Native American Christian identity, to speak so personally to me. Still, who would have thought that a poor, Hebrew-speaking Jew born 2012 years ago could speak my identity into existence and continue to speak to me today?

When I was younger, I was filled with self-loathing. I rejected my family’s culture, I rejected the culture into which I was born, and I didn’t want to know about the places from which I came. I rejected the things that made me: I refused my history, forgot my first language, and despised the way I looked and the customs of my family. I also rejected God. I didn’t believe that He could exist, and if He did, then I hated Him. Hatred of self easily rolls downhill toward hatred of Creator. Long after I shed that self-hatred and became a follower of Jesus, I still assumed that my culture was a meaningless part of my identity.

But somewhere between learning a haka, cooking frybread, absorbing stories, and learning at the feet of elders, God chose to speak directly to me—a first-generation Chinese American with napa cabbage and a jar of chili paste snuggled in the fridge between some jicama and hummus.

God told me that it was time to reclaim my culture. Like every culture, mine reflects a part of His character: He created us all in His image. While we can’t encapsulate His entirety, we each have the honor of reflecting one facet. In the end, we will all worship Him in our own languages, dance our own dances, and sing our own songs. I don’t know what He wants me to do with this: maybe someday I’ll help build His kingdom in China. Maybe He just wants me to honor my family and honor Him by fully inhabiting my identity.

Reclaiming my heritage won’t be easy. Where is my history located now? Where did I discard it? I need forgiveness from my family. I want to learn what I can about my lineage. I need to reacquire my language. I want to learn the dialects particular to my family. I want to love the things about myself and my people that I once despised. I have to repent for thinking that how God made me didn’t matter. After all, if I reject myself, I do not fully accept my Creator. I need prayer support, brothers and sisters. And to those in my faith family who are first-generation Chinese Americans, I need guidance and mentorship. If I’m to reflect one small pearl in the vast ocean of God’s glory, then I want to do it well.

The conference was a preview of heaven. Hillsong and DCB weren’t present at the table, but we attributed Chippewa honor songs, Maori hakas, Hawaiian hulas, Alaskan native folk dances, Navajo Scripture songs, and more to the Lord who delights in the variety of His creation. In the beginning, our Sioux sisters stood during worship to respect the performers. Soon, we all stood with them. And a Navajo storyteller asked us not to applaud, but to show our appreciation by breathing on our hands and clasping them to our chest. We did that, all silent but for our collective exhale. Psalm 150 came to mind. I’ve since wondered if I’d ignored customs in my own background that demonstrate such respect and beauty. What cultural limbs had I severed in hatred and haste that I’m now ready to regenerate? A phantom arm was once all that reminded me that I didn’t quite belong to a “dominant culture,” but I’ve experienced rebirth before, and thus I have no doubt that regrowth is also possible.

At WJEF, I also heard the story of the prodigal son—the parable that sealed my soul to God’s—further uncovered. Speaker Mark Charles revealed that the younger son had not only shrugged off his relationship with the father; he also rejected his culture by disrupting customs and leaving his hometown for someplace distant. When he returned, his father blessed him richly with more than re-acceptance. He also gave his son the riches and symbols of his culture and welcomed him back into a community of history, tradition, and language—not as a slave nor even a commoner, but as a leader. How poetic that the Lord would use this one ladle to fetch me draft after draft of living water.

And now, between my napa cabbage, chili paste, jicama, and hummus sit a jar of home-canned raspberry jam given to me by a sister from Unalakleet and a packet of dried squid given to me by a brother from Hilo.

• “Think of all the ways God could have reconciled Himself with us. At the end of the day, He chose the messiest, most excruciating, and most humiliating way possible: He became one of us.”

• “There’s no one who can point to God and say, ‘I suffered more than You did.’”

• Frybread is a symbol of oppression twisted against the oppressors and reforged as a symbol of cultural pride. “Would Jesus feast with me and eat this bread from my oppressors?” His cup was a burden greater than any of us could bear. Still, “He’d eat the oppressors’ food, the unhealthy food. He’d mourn and celebrate with us. He’d eventually die with us.”

• It’s easy to forget that Jesus was a person.”

• The dynamic of power and leadership between many Natives and Whites is a symptom of perpetuated prejudgments and oppression. One way to combat this is to focus on training Native peoples as leaders and representatives of their own communities. Relinquish control. Facilitate, and don’t lead. Build trust and relationships.

• To those with privilege, e.g. white males, you must play the part of the advocate. You cannot give up your privilege, try as you might. An apology is often worth far less than availability.

• Re. essentializing/exoticizing Native Americans: “If we would learn our own stories, we won’t feel so inclined to fill our voids with ‘Native stuff.’”

• “We often don’t know how to reconcile faith and culture because we don’t know what’s so good or bad about our cultures. But if you know that some customs hurt or ostracize, then get rid of them.”

• In passing out the multiplied loaves and fishes, God could have simply distributed the food Himself. He could have quelled the crowd’s hunger with just a breath. But He chose to hand the elements to His disciples and to include them in His plan for nourishing His children. We are purposefully included in His plan to be reconciled with all the nations.

• “Assimilation is an American value. It’s also a value in American churches.”

• All dominant-culture American Christianity is contextualized worship. Jesus was not a WASP, and He did not speak English. “Unless you attend a Hebrew-speaking synagogue on Saturday nights, your worship is all contextualized.”

“God has called us to unity, but unity is not sameness.”

Taken from the blog A Mile and a Half Closer to the Moon (www.oxhu.wordpress.com) by Hakuna.