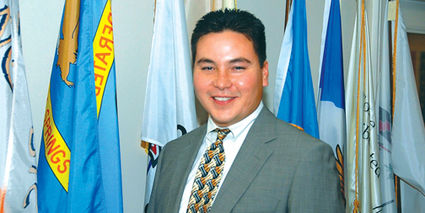 Donald “Del” Lavendure, an enrolled member of the Crow Tribe of Montana (Ties the Bundle Clan) with ancestry from the Little Shell Tribe of Chippewa Indians of Montana, was appointed by then Assistant Secretary-Indian Affairs Larry Echo Hawk to the post of Deputy Assistant Secretary beginning July 29, 2009.

BILLINGS, MT—The Little Shell Tribe of Chippewa Indians of Montana will be focusing once again on federal recognition, the new chairman said.

The tribe was denied federal recognition by the Bureau of Indian Affairs but is appealing. The tribe is also seeking recognition through an act of Congress.

“We’re starting to operate as a tribe once again,” Chairman Gerald Gray, who was just elected to a four-year term, told the Associated Press.

The tribe recently opened a cultural and visitor center.